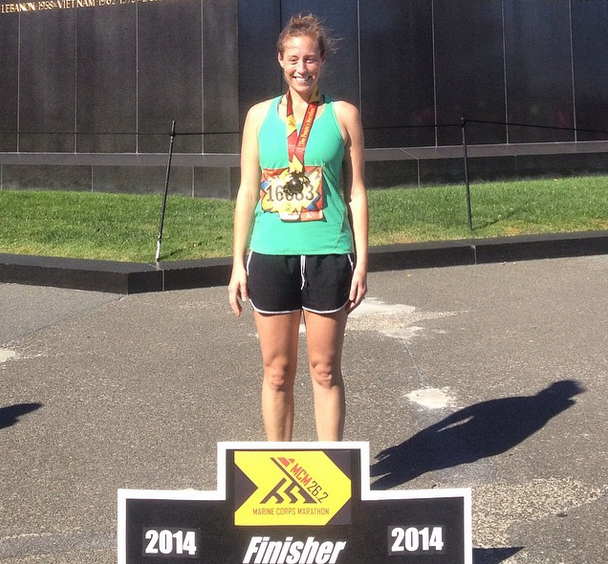 Hello race recap time for the 2014 Marine Corps Marathon! It’s always so hard to collect your thoughts about the marathon because within 26.2 miles, a million thoughts and things swirl in your mind — and ache on your body.

FAIR WARNING: Marathon recaps are really long & kind of rambly. I like them that way 🙂

I came into the race with far less miles on my feet than any marathon before. I was okay with that because honestly, running miles wasn’t my priority for this season of my life but I still LOVE the marathon and wanted to run it.

I made sure to prepare with several long runs, including a 22-miler, and felt that was sufficient for running and completing the race without feeling like I was totally going to die. I was…mostly right. 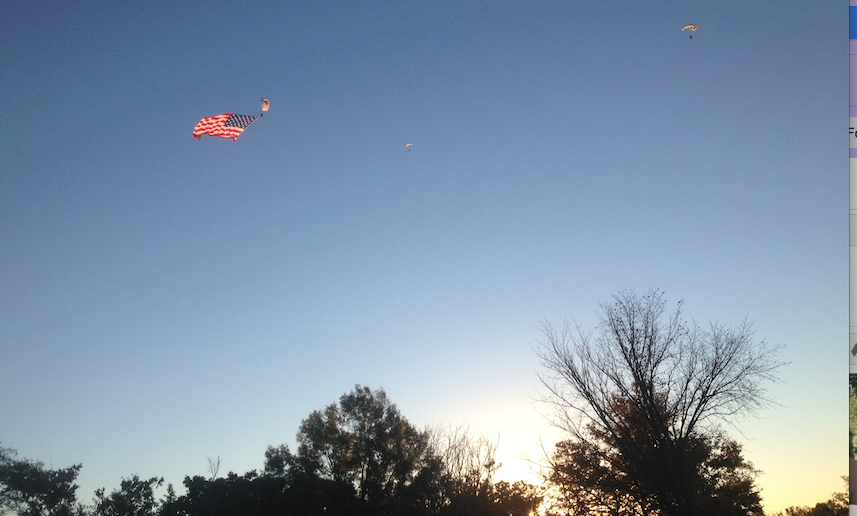 I was up at 5am, had a bagel with almond butter (almost always what I have before a marathon), a little coffee and water. I wasn’t as concerned with not making bathroom stops as I normally am so it was nice to drink some fluid.

Rachel and I left for the race at 6am and arrived at the Pentagon, filed in the darkness into the waiting area and began stretching. I felt pretty good and excited to be running. No dread or anything, just happy it was a beautiful morning and glad to finally be running a marathon again! 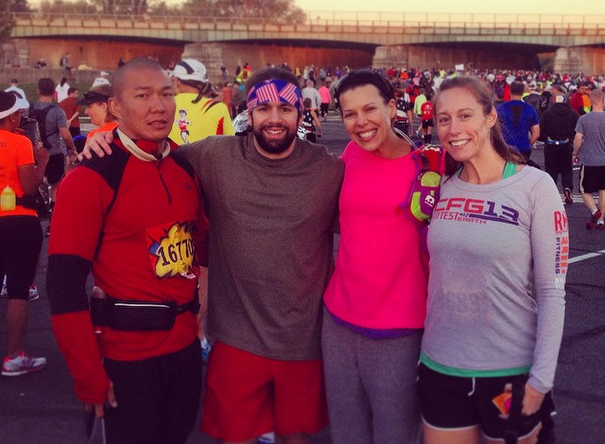 We crossed the starting line about 8 minutes after the gun. My only thought was, don’t go out too fast and enjoy yourself. All the fans on the sidelines perfect cheerleaders and that is really one of my favorite parts of the whole MCM experience.

Almost from the start, I could tell I was running too much on my right side. Ugh. I began to consciously redirect to my left but it’s really hard to do that for a long time. I do think my efforts helped some later but it also became a huge problem.

Rachel and I stayed together, running around a 9:40 or so pace. I soon realized there was really no hope of running a 4-hour race at this pace but I knew that was unrealistic without training for it anyway. Oh well — here to have fun!

We finally made it to Haines Point where you reach 13.1 miles. To me, the race doesn’t really get started until then. It’s then that you’ve done half and well, you can do it again. My leg was really achy and I said I would wait until after the half to stop and stretch it. I knew the aching was seriously bad news so early on.

Rachel and I parted around this time, which was fine, as I felt like I needed to be in my own head for the race.

I was so loving the weather and the fans — seemed like there were more this year! I gave every kid with their hand out a five and smiles as we passed crowded cheering areas. You are running a marathon, Ericka! The privilege and ability to be able to run 26 miles is never lost on me. It’s hard but I appreciate what my body can do — and maybe that’s why I keep doing it.

However, it was already hard. I knew I was going to have to stop several more times to stretch my leg — something I didn’t do ONCE in 2012, when I ran two sub-4 marathons.

I tried not to let it bother me and continued on. Unfortunately, I was already doing the mileage countdown by mile 14. I said okay, when you get to 16, there’s only 10 more to go and that’s easy. Ha ha, yeah right!

When you want to walk at mile 15…Houston, we have a problem. I think I took my first walk break around mile 15 and quickly realized this race may take forever.

Nevertheless, I was committed to enjoying the scenery and the race. I had no doubt in my mind I would finish. But…I kept having having visions of collapsing onto the grass and not getting up. I shoved them out of my head and kept on. I didn’t walk for long and picked up. The funny thing was, I could walk for a few minutes and then pick back up a decent pace, passing people around me.

After mile 16, I think I probably walked for at least a little bit almost every mile. Ugh, felt a bit like a failure at that point — especially when people were cheering us on and I was freaking walking in the middle of all the runners.

But…you do what you gotta do. When I hit mile 18, I remembered how great I felt in 2012 at that point — I was energized, not tired and my legs felt good. Oh man, what happened to those days? (yes, I know, training!)

Getting to 18-19-ish, though, renewed my spirit because the finish felt kind of close for the first time. Crossing the bridge into Crystal City is a monster. It really feels neverending — mostly because there’s a slight hill the entire time. I had to stop and stretch on the bridge again. Hey, at least I wasn’t the lady puking on the side.

Crystal City, where I cheered my heart out last year, was a doozy. I tried so hard to get through the whole thing running but just couldn’t do it. The thing was, I felt so nauseous and my feet felt like they were being pounded by a hammer every step. It didn’t help that I accidentally wore my OLD shoes instead of the ones I was supposed to wear. Good job, Ericka.

I felt like I was disappointing fans whenever I stopped for a walk break. At one point, in the middle of mile 22, I actually sat down on the curb! What?! I remembered from my very rough experience at the Chicago Marathon, that sitting down actually helped me refocus. I sat for maybe a minute and was back up, into a jog. The sitting did help a bit.

Also, though, I remembered having to sit on the sidelines last year when I couldn’t run — and how disappointed I felt watching everyone else cruise by. I needed to remember how glad I was to be here.

The last 3 miles were kind of a blur. I slow jogged most of it, though took a couple of walk breaks. Until I saw the 25 mile marker, it still felt really long. At 25, I picked up the pace a little. I still had to stop and walk a bit though — what the crap?!

Finally, I see mile marker 26 and that big ol’ hill. At that point, the hill didn’t even feel hard because I was just so happy it was there.

I honestly didn’t even look at the clock when I crossed the finish line because I knew it would make be cringe. I didn’t even know if I made it in under 5 hours.

Unlike other marathons, I didn’t feel really sick or like I was going to pass out. My body definitely didn’t work as hard here and it showed.

After getting my medal, I immediately started stretching in the grass, then made my way out of the finisher area and headed to the metro. 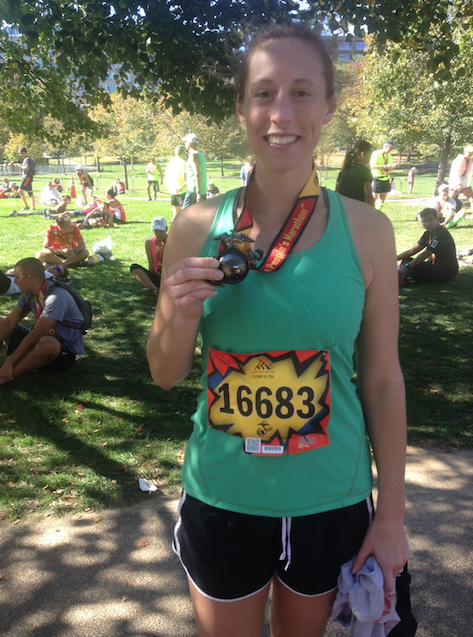 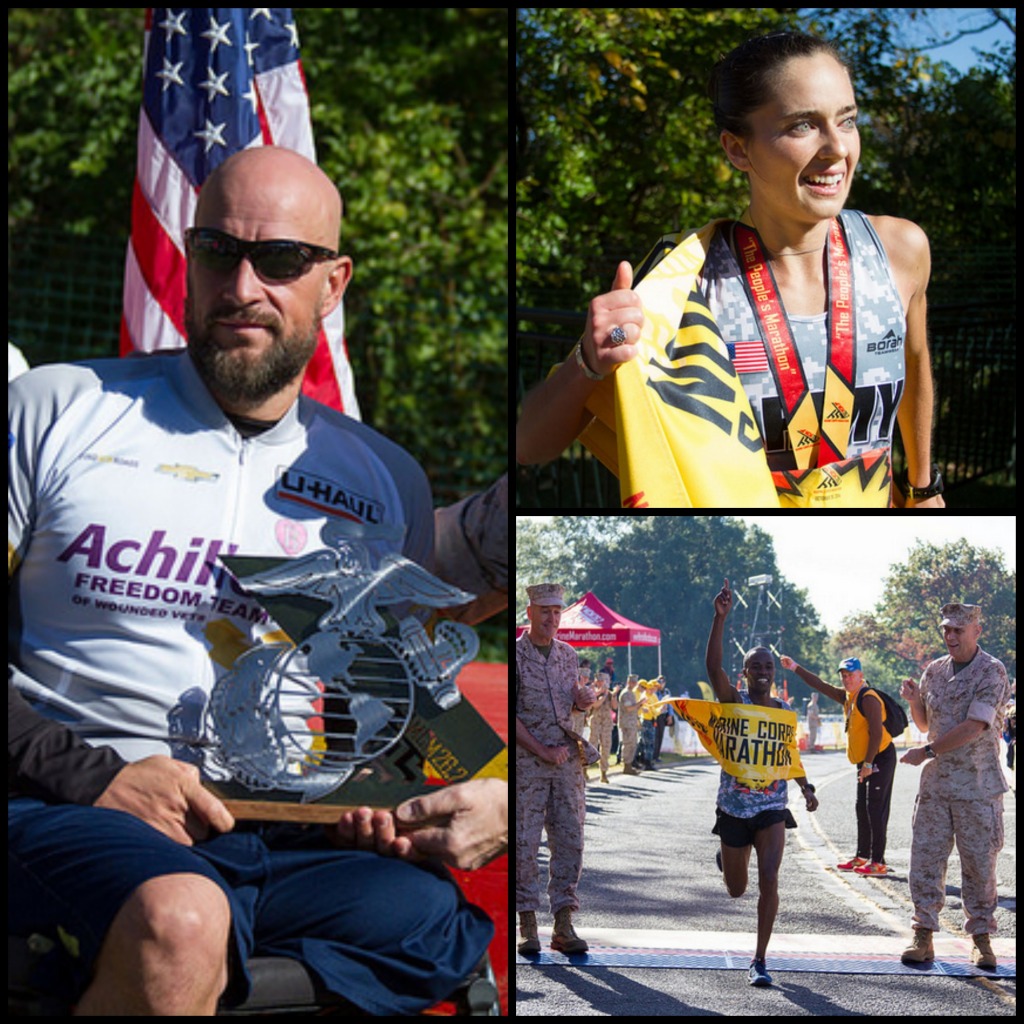 So as I was running this hard race, about 10 miles before I was done, I told myself — the hardest marathons are the ones you learn the most. That’s true for me.

I thought about how if I was doing a training run and I felt this way, I would definitely quit before I finished my mileage. But here, quitting was simply not an option. Even though I was envisioning flopping down in the grass, it never crossed my mind to actually do that.

What it shows me is that it really is just one foot in front of the other — sometimes that’s all your brain can comprehend — and you can go a lot further than you think you can. I really want to apply this to other parts of my life. Its rare that I make myself really uncomfortable. But it’s worth it when you do.

I was really uncomfortable during this race. I was thinking things like: why am I doing this? I think I’m done with marathons. Never run a marathon without full training again. Why do I think marathons are so cool anyway? What’s wrong with half-marathons?

It’s funny because when I trained properly in 2012, I didn’t think those things at all. I felt strong and good and heck, that’s why I ran THREE of them that year. 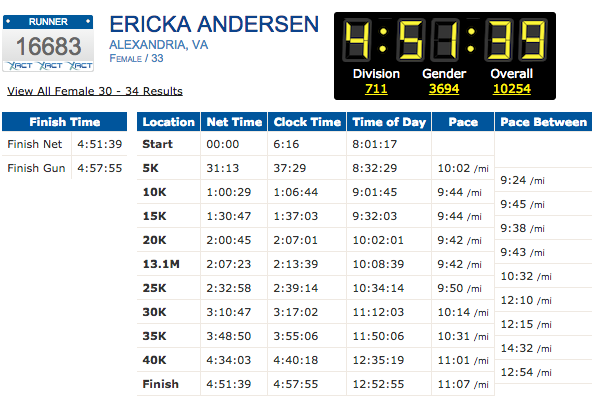 Of course I was also inspired by the many individuals running while pushing someone who was handicapped. This has become more popular lately and every time, it reminds you a) you are lucky to be able to run and b) you are running for those who can’t.

The truth is…I’m embarrassed by time — which, by the way, was 4:51. I don’t mean to sound runner snobby by that because I know there are plenty of people who can’t finish that fast. But more than that I know people who can finish waaaay faster. So far, several people have said “Hey great job, I saw you broke 5 hours!” and I want to say…but, but, but what about when I broke 4 hours, do you know about that? Of course I can’t say that and non-marathoners don’t give a crap about your time anyway.

But the reality is, you can’t halfway “wing” a marathon and expect to turn out decent. I mean, some people can, but I’m not one of them.

In the end, I finished my 9th marathon. I felt good about that and of course, would like to do one more this year, though I’m not sure how smart that will be with this body mechanics problem.

To a beautiful, wonderful race and the random strangers who cheered me on so well. To the marathon’s life lessons and the fulfillment it brings my heart. To the blessings and strength I’ve received from pushing my body and recognizing how lucky I am to be able to do that. 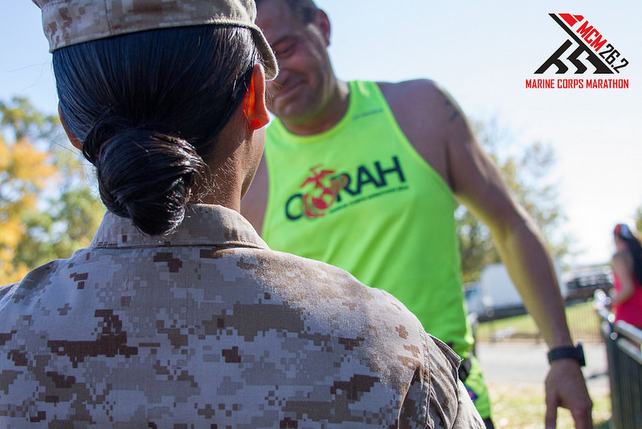