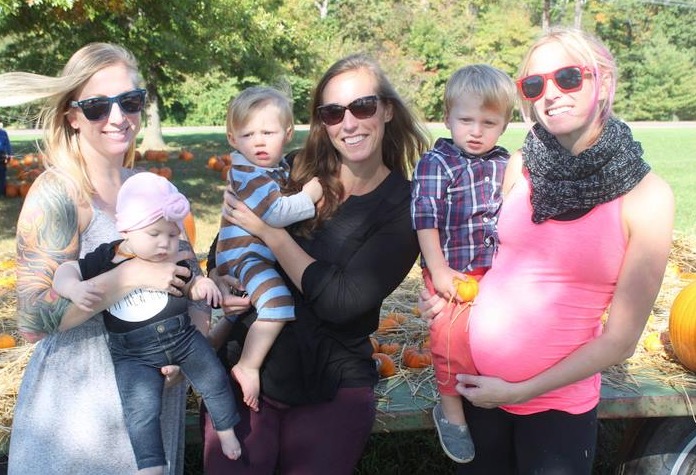 My grandma got breast cancer when she was in her 40s. Her sister died of the disease and later, other kinds of cancer killed my Grandma. Thankfully, it was much later and we got an extra 30 years with her that we thought we might not have.

But it was clear breast cancer ran in our family. That’s what everyone dreads, right? Somewhat recently, there became a way to test and see if you had the BRCA gene mutation that makes you much more likely to develop breast or ovarian cancer.

Getting the BRCA Gene Test

My family members and I all got the test. Some people say they don’t want to know things like this, but with BRCA, there is an 85% chance you may develop breast cancer and so, we wanted to know. We were all committed to the most prevention possible, which meant undergoing a preventative double mastectomy should the the mutation be present. Given my grandmother and great aunt had gotten the disease so young, it was even more imperative.

One by one, we took the test. A positive for my mom. A negative for my aunt Barbie. Another positive for my Aunt Julie. Both my mom and aunt who test negative promptly got the surgeries. They were both around 50 years old at the time, so they didn’t want to wait.

Then my sisters and I had a turn. To be honest, I wasn’t that scared. I knew if I had the mutation, I would just take action. But, my test came up negative. So did my sister Shelby’s. My sister, Lindsey, was the one with the unlucky ticket. It was hard because she was the most scared of all. She lives with a sometimes debilitating fear that can take hold of her, wrapping its worry and irrationality over her brain to the point of tears and terror.

But, she was brave. She didn’t run away from taking the test because she didn’t want to know. She took the test, got the results and with a new baby on her hip, scheduled the surgery to remove her breasts…the ones she had planned to use for more babies. But, better a mom that’s around when you’re 20 than a mom the breastfed you and died when you were 10. There was no question for Lindsey — she would have the surgery. It was a major surgery, intense in nature and recovery, requiring weeks of recuperating with drainage bags and ice packs and pain medication. She needed a lot of help with her baby and mentally, getting used to life without two body parts.

Lindsey & I talk about her experience here:

Like my mom and aunt, she got breast implants and no one is any the wiser now. She’s moved on and has since had 3 more babies, feeding them donated breast milk and formula — conquering more fears that stand on the foundation of the big one she mastered by making this decision. She’s 35 years old and now doesn’t have to fear that 85% chance of developing breast cancer and enduring the hellacious years like my grandmother did. In a few years, she’ll have a hysterectomy since ovarian cancer is also a high risk with the BRCA mutation.

Thank you, science (don’t let it go to waste!)

Science has done our family a huge favor. Female members of my family that I love dearly will now be around a lot longer. But breast cancer numbers are still sky high for women in the U.S. and I want to take this opportunity to urge you not to run away because you don’t want to know.

Every few weeks, I give myself a self-exam in the shower and recently, I made myself get back on the bandwagon of getting regular check-ups after years of being very sporadic about my health. Each time I do a check, I get a little nervous. What if I feel a lump? Just because I don’t have the mutation doesn’t mean I can’t or won’t get breast cancer. Prevention and knowledge are scary but they are best weapons of defense. I wouldn’t think twice about lopping off these boobs if I though they were a threat to me seeing my kids grow as old as I possibly can.

Its Breast Cancer Awareness Month for one more day, friends. Be aware. Put it on your calendar. Get your check-ups. Do your self-checks, make your appointments. Everyone who knows you will be glad you did.