Melinda Gates Complimented Ivanka Trump – And Everyone Needs to Hear It 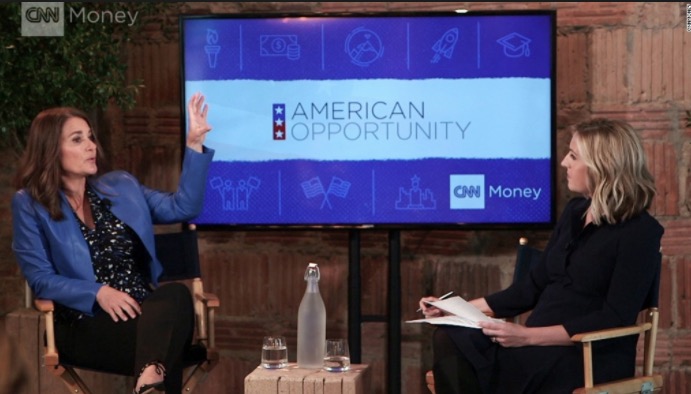 I’m so used to hearing those on the Left castigate everything related to the word “Trump” that I was shocked when Melinda Gates complimented Ivanka Trump this week during an interview with CNN’s Poppy Harlow.

When Harlow pressed Gates on her thoughts about the First Daughter’s paid leave and family initiatives, she relented with some very kind words:

“I think she’s doing her best. She certainly cares about families and she cares about women so I think she is trying to carry the water on this,” said Gates. “She’s very bright and very committed and she got that research and talked to a lot of people about this.”

The comment was a breath of fresh air, after hearing nothing but nastiness about Trump from feminists since she joined the campaign trail back in 2015.

She’s been publicly shamed out of a gym class in Washington, DC, rejected by fashion designers who refuse to dress her, and booed at on women’s panels simply for being a Trump – never mind her incredible success as a business owner and female leader in her own right.

Credit is due to Gates, a sizable cultural influencer, for taking the lead and showing the status quo haters how it’s done. She doesn’t dismiss someone by association – she takes their ideas for what they’re worth and looks to find solutions they can both agree on.

And it’s not just Ivanka. Gates admitted that both she and her husband have had multiple meetings at the White House, working the Administration on the issues they believe in – and she appears to be optimistic.

The tech industry, of which the Gates’ are a major part, is divided on their support of Trump – and many simply refuse to visit the White House. This seems counterproductive at best, foolish at worst.

While the Trump Administration may never line up with these leaders’ personal beliefs on cultural issues, there is much promise for them in the tech industry.

Such is also the case for women’s interest groups and some of the policies Ivanka Trump wants to put forward. Instead of viewing the Trumps as enemy #1, it’s time people took after the Gates and looked for opportunity and allies where they can find them.

In fact, in a marrying of those two issues—tech and women’s interest — the Administration just directed $200 million to tech education for women and minorities. This runs the gamut from women’s issues to tech innovation to education – issues even those who oppose Trump in other areas can get behind.

Of course, the Gates Foundation is heavily invested in fighting global poverty and they want to do everything they can to keep funding secured for those investments. As Gates noted, “These things have good bipartisan support…It’s our job…to remind Congress that those investments make an enormous difference in the world.”

She was also quick to reinforce the point that helping those around the world is not a partisan issue at all, mentioning the invaluable work of President George W. Bush in giving $5 billion a year of humanitarian aid to Africa – more assistance to the country than any other President.

There are things the Trump Administration can do, as well, if given the opportunity. Bipartisanship is not a dirty word, despite factions on both Left and Right who have come to oppose it on issue after issue.

The utter hatred people have for this Administration is preventing them from finding opportunities available to them to improve up on the issues that matter. Bitterness never got anyone anywhere – and there appears to have been an epidemic of it sweeping across the country since last November.

“At the end of the day, I’m not a person who’s going to walk away and say, ‘If you don’t do what I want, I leave. I care deeply about America. I want America to do well. America’s more important than bloody politics from my point of view.”

Despite whatever the President may tweet out to the dismay of his communications staff, the White House is still the most powerful office in the land. Smart people find their way to work with what’s available – and that’s how progress is made.

If Bill and Melinda Gates can have multiple meetings at the White House and work tirelessly to maintain their efforts for people around the world, a lot more well-meaning individuals can put down their battle swords and join a Resistance that will actually make a difference long after the Trumps have exited the building.