To the People on the Plane With My Toddler 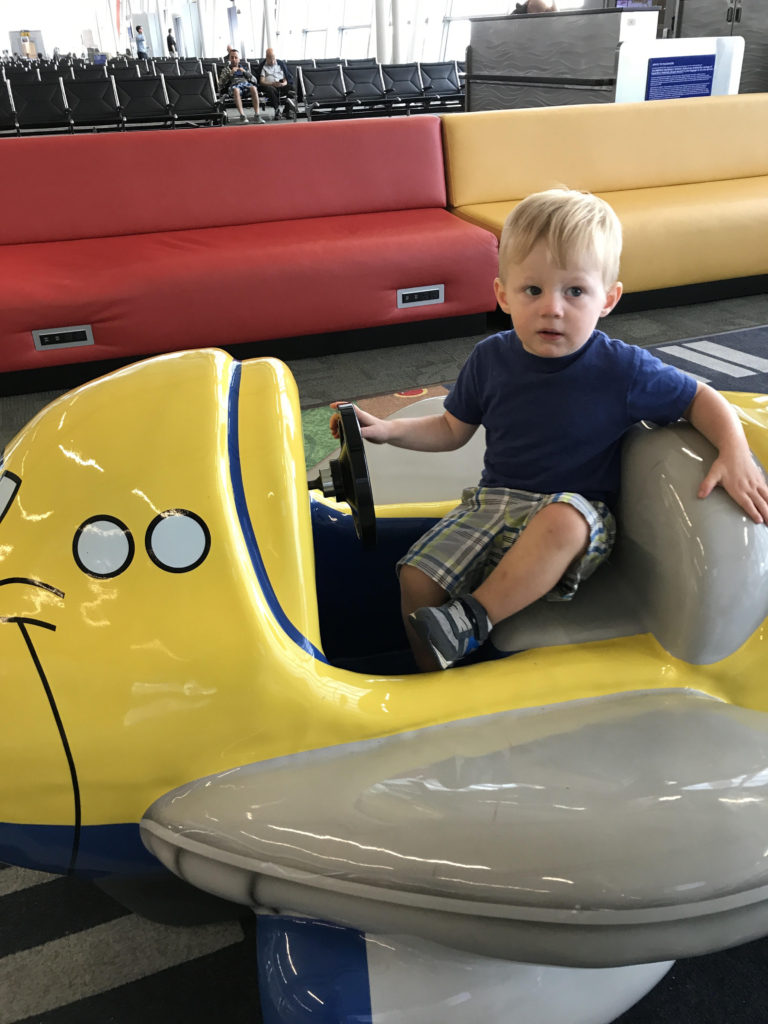 I never thought much about flying with babies before I had one. I knew I’d prefer not to be seated by one that was crying or in front of one who would kick my seat, but I would also never make a poor momma feel bad if that was the case.

When I got my own baby on board a plane, I started to get worried. Would I get dirty looks? As Jacob tore through the waiting area aisles shrieking in delight, would people be thinking, “please don’t let them be on my flight?” Would the grumpy old man who got the pleasure of sitting next to us in a two-seat aisle be angry when my son flung his cracker bag in his face accidentally?

You become more self-conscious than you realize you would when it comes down to go-time. Now, I don’t think you should be. I’m not one of those people that thinks you should leave apologetic notes for passengers with soothing candies because your children may be annoying. Kids are part of this world that we all live in and we shouldn’t have to apologize for their presence. And yet, I was still nervous.

I took my second trip alone with Jacob on an airplane this weekend. The first one, he was closer to a year old and a little more calm, even sleeping part of the way! I knew that wouldn’t be the case this time around. Waaaay too much excitement to consider sleeping, riiiight? I came prepared with his own kids Kindle Fire revved up with Moana and Finding Dory, a plastic bag full of more snacks than any child could ever eat (though he made a nice dent), and several of his favorite books.

Please, God, let these things sustain him so he doesn’t incessently kick the chair in front of us or constantly want off my lap. Because yep, you better believe I used that “free ticket” before he turns two. Turns out, I have an exceptionally tall toddler, though and well, I think it may have been hard to believe he was under 2. But…I digress.

We had some rough moments on both flights there and back. There were several rounds of screaming to get off my lap, multiple attempts to dive under my neighbor’s feet and grab her cell phone, one moment of cracker crumbs spraying into someone else’s lap — and countless times people grabbed his sippy cup for us rolling down the aisle. I was unable to get him to wear his kid headphones so the movies were helpful but not that much because they were silent. I sang the ABC’s as he struggled mightily to wriggle off my lap when the “fasten seat belt sign” came back on. It was the longest hour and a half of my life (I know only an hour and half, I’m such a wimp! Another couple I met with a son the same age had just flown in 18 hours from Australia with him on their laps!)

Despite the crying and kicking and grabbing, I saw not one dirty look or mean comment. All of my seat mates asked his name. One of my first seat mates, before we had to move because of an air mask issue, was an older man who reassured me he had raised four kids and I shouldn’t worry about anything. Several older women, as we walked the aisles during “seat belt sign off,” would play peekaboo with Jacob or smile and wave with clear delight. He indulges the attention, getting an adorable smile or acting bashful, laughing hysterically or just staring up at someone with the cutest of faces. He stood on my lap and played peekaboo games with the middle-aged man behind us and the flight attendants came over to give him wings to pin on and extra snacks (though by that time, I was like, how are you STILL eating snacks?)

I had been scared that people would be upset to have a kid this age on the plane, but instead they seemed happy. They seemed glad to remember the little joys in life, expressed in the tiny-toothed grin of a toddler just hoping to make an adult smile back at him. They might have been relieved that a slice of glorious life in the form of a curious little explorer broke through the mundaneness of their day.

I’ve always said the only thing that could ever make me smile when I was depressed or truly sad or heartbroken was baby smiles or laughter. It’s like that joke I heard once…it doesn’t matter if you are a serious 50-year-old business man, when a 2-year-old calls you on an imaginary phone, you pick up!

So to all the passengers who rode with us this weekend, thank you for indulging my little guy and allowing his melodramatic emotions enter your spheres. They were high and low — one minute screaming, the next minute cracking up — but you took it in stride and made a stressed out mom just a tad less stressed out. Airline passengers, your efforts to make a mom feel better and love on a kid that isn’t yours don’t go unnoticed. Remember that next time you are flying with one those little rascals nearby.