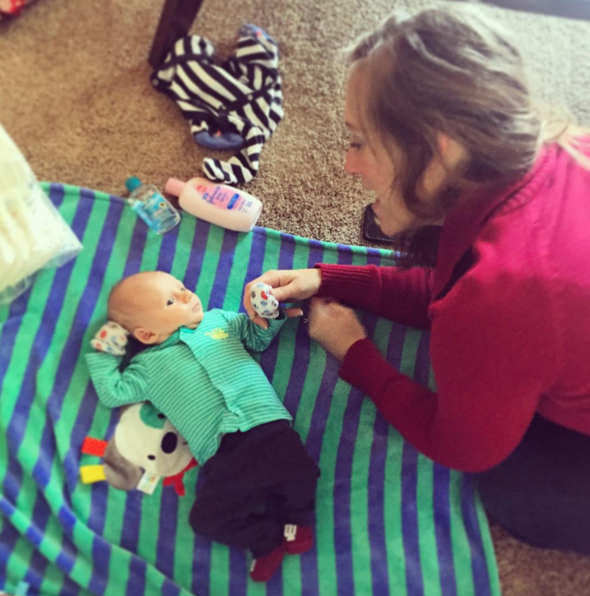 1. Newborns don’t need coats. (or snowsuits for that matter)
I was like, he’s going to be born in the winter, he needs a coat! At one week old, we went to Babies R’Us and bought a “newborn” sized snowsuit. Problem #1 — he was barely 6 pounds and the newborn size enveloped him. Problem #2 — Unless you are venturing into the Arctic tundra, a plethora of cozy blankets and a hat in the carseat are plenty of cover for your little love in the winter.

2. Babies don’t need shoes until they are like a year into the gig.
When I found out I was pregnant, I bought newborn shoes from Sperry. Yep, I spent $30 on shoes to put in my “announcement” photo, thinking he’d actually wear them. I’m pretty sure he was born with giant feet and never fit them anyway. They’ve now been passed on without a wear. He’s never wore shoes until recenlty because they don’t need them until they start walking. I had no idea!

3. Gagging on food doesn’t mean they are choking to death.
Transitioning from formula to food is kind of scary. The second you hear a gargled cough, you think they are about to die. Not so. Apparently, babies just have to learn how to manage food, to use their reflexes and understand how swallowing food works. It’s actually good when they gag because they are learning. Still freaking scary to hear though.

4. Learning how to properly use a car seat is tricky.
Car seats. Never thought twice about them and certainly didn’t know how needed to get a safety inspection check up to make sure they are installed correctly. And installation is part 1. Then you have to learn how to strap them in correctly. I figured this would be common sense. It wasn’t. We watched several “how to” YouTube videos and once Rick though I pull the straps so tight that I was choking him. Probably that wasn’t true but I was always thinking I was doing it wrong. Now, it’s easy but then…I was like, how is this so hard.

5. Breastfeeding is FREAKING hard.
I was blindsided by this. I knew nothing of breastfeeding other than the obvious. I didn’t even know that milk took days to come. It hurt so badly trying to squeeze out the colostrum. I had every intention of breastfeeding “like everyone else.” But Jacob wouldn’t latch correctly. They immediately had me try the nipple shield, which helped. But still, I struggled. I cried because it felt like being stabbed everytime he went to eat…and then he would take 30 minutes a side and I couldn’t even tell if he was getting much. After a week, he was losing too much weight and I needed to pump to put in a bottle, but also breastfeed him normally and supplement with formula. It turned out, my whole life would have to be about feeding. I think, had I been more mentally prepared for the hard work it would take, I could have gotten through it. Long story short, I stopped breastfeeding completely by 3 months. I was miserable and hated every second. Jacob didn’t seem to care either way. I’m still shocked when I hear of people still breastfeeding now. I know that’s totally normal but I can’t imagine having done it for that long.

6. There’s a reason to wait 6 weeks to work out.
I went on my first short run at almost 5 weeks post-partum. I was itching to get out there. I felt like I was literally peeing my pants the entire time. That continued to be the feeling for several weeks. Things just aren’t settled down there yet. It’s not time to bounce around. This it the only time in life you are taking off — you have the rest of your life to get back to it.

7. There’s a reason to wait 12 weeks to go back to work if you can.
Three months sounded like forever to be off from work to a person who has been working nonstop since she was 14. Surely I didn’t need that much, right? Plus, I was working from home so…I would handle it. Again, not ready. Part of the reason I was forced to drop breastfeeding was because I couldn’t handle the stress of that while working. You need to get yourself together as a mom — and you are dealing with extreme post partum emotion that takes awhile to level out. Working wasn’t all that bad but it’s true what they say — they are only so small for so short. Don’t waste it.

8. You will want your doctor on call 24-7 during the first few weeks (at least I did)
I seriously had no idea how many little things would pop up. Night time kind of terrified me simply because I didn’t have access to my doctor’s office. I know there is is some kind of national number that is a 24-hour line but I forgot what it is. I think a lot of this is first-time mom stuff but I certainly felt overwhelmed.

9. Learning to feed a human child is difficult.
Tap this under “things I never once thought about.” Even knowing how much formula to give him when he was only on bottles was hard to know because he couldn’t talk! Then, when we were introducing food, it was hard to know what and when and how much or how many bottles to give with it. As we transitioned out of bottles to more real food, Jacob had no teeth and the fear of choking was real. And even now, at 13 months, I’m realizing why my mom (and many moms) feed their kids lots of spaghetti-os, peanut butter and jelly and more — because it’s hard to prep stuff for well balanced meals.

10. Every “first” actually is exciting
I used to kind of roll my eyes when parents got excited about first steps or first words but now it’s like he’s winning the Olympics every time he does something new. We get so excited and he’s so proud, it’s adorable. So far, he’s still only said a distinguishable “Da da” but I will be super pumped when he says “Mama!”

11. That I would mourn putting away clothes that are too small.
The minute I had to start packing up the newborn outfits (that were way too big when he came home), I wanted to cry. Today, I packed up all the 12 month clothes and it just makes me SO sad. I know it’s silly to be sad about him growing up because hello, he’s here and healthy and amazing, but…I do get sad. And I envision myself as this mother of a teenager who pathetically watches him walking away to play with friends while I wish he was little and wanted to cling to my leg all the time again. Such is life, I guess.

12. All the parenting cliches are ridiculously true
Examples include:

You get the picture. You’ve heard it before, in books, in movies, from friends and family. It all takes on a whole new meaning when you’re actually in it. 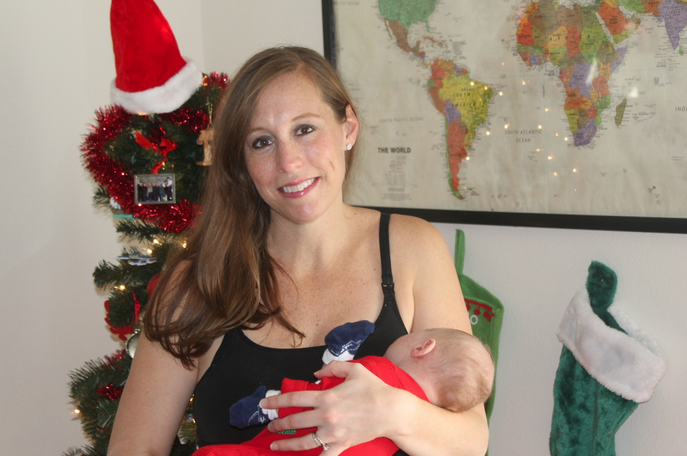