When Your Baby is Sick 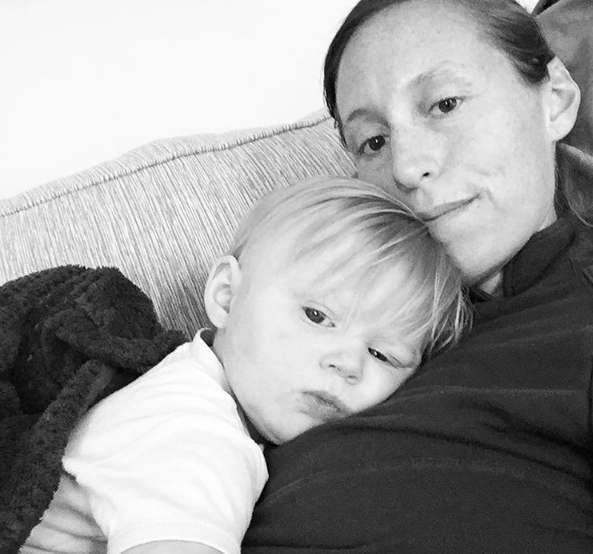 I had heard horror stories about how hard it was for your baby to be sick. Somehow we made it to 10 months before we really got a dose of it. He has been sick for very short time periods once or twice but this weekend was a doozy.

Timeline of a sickness

I think it really began Thursday night and by Friday morning, he was doing pretty badly. His temperature got up to about 102, I think (so hard to take baby temperatures!). We arrived at daycare Friday morning and I finally put his strange behavior and lack of appetite together when I realized he was really hot. We took his temp there and were pretty much sent home.

The day was tough. This little man, usually so happy and busy, could do nothing but lay on my chest with a dull stare on his face. He was so hot and listless, it made me so sad! He took a long nap but woke up the same and we spent hours lying on the couch together.

As many mamas have told me, it sucks when they are sick, but you sure do love those baby snuggles. Didn’t last too long and he just got cranky. No matter what I did, he just kept crying. I tried baby Tylenol and Pedialyte but nothing seemed to help. I was so ready for Rick to get home and he got home 2 hours later than normal. Sick baby day is a long day!

Incredibly, he slept 13 hours straight Friday night so I thought Saturday would be better. No sirree, his temp was up and he was unhappy. He took a 2.5 hour nap and woke up still grumpy. We decided to get out of the house but then he threw up at the restaurant so we had to leave. That was his first time legit throwing up (not spit up). He didn’t seem too bothered by it but the rest of the night was pretty awful.

At bedtime, he fell asleep early at 6:30 but woke up at 9:30. Thus became a very long night. He was crying on and off for hours until finally I brought him into bed. He would only sleep on my chest.

Because I’ve never slept with him, I was terrified to fall asleep and forget he was in my arms so I was awake until about 3:30am. Eventually I dozed off somehow. At around 5:30am, I was able to transfer him to the bed beside me, where Rick and I were forming walls from the bedside. It’s only a queen bed though so there wasn’t a ton of room.

We all slept until about 8:30am. I thought for sure he’d be better on Sunday but that wasn’t the case. He seemed to still feel pretty badly so we continued the medicine, tried Pedialyte again and then he threw up again. I also had my first experience of being thrown up ALL OVER, like it was all over my clothes and under my shirt and everywhere. Of course I didn’t mind, I just felt bad for my baby — and poor thing doesn’t know that it will ever end! He might think he’s going to have the flu forever!

We trudged through the day with crying and misery, until he went to bed at his normal time Sunday night and here we are Monday morning. He slept through the night and I’m waiting for him to wake up now. I think he will probably be mostly better today, as his fever was gone last night.

Having a sick baby is so hard because you can’t communicate with them and let them know it’s going to be okay and go away soon. You can’t tell them what will make them feel better or soothe them other then to hold them. I missed the bright smiles and laughter that usually makes our days with Jacob. Not being able to make him laugh was one of the hardest parts!

Then of course the scared Mama in me was predicting worst case scenarios. I tried to rationalize and calm myself down by saying that if something more serious was wrong there’s nothing I could do to stop it. I’ve always heard that when you have only God to rely on, your faith is so much stronger. In my blessed, abundant life, it seems like there are so many things I can run to before I run to God.

But when it comes to the safety and health of my child, I have to my put my faith and trust in His protection. I pray when I’m not there or when I don’t know, He does. When it comes to Jacob, I have heard Him say, “I’ve got this.” I know there aren’t always happy endings in life, but there’s a peace that comes with knowing my baby is in God’s hands, not just my hands.

Like people always say, whatever happens to your kids hurts you more than it hurts them. I’m finding that to be true in many cases already.