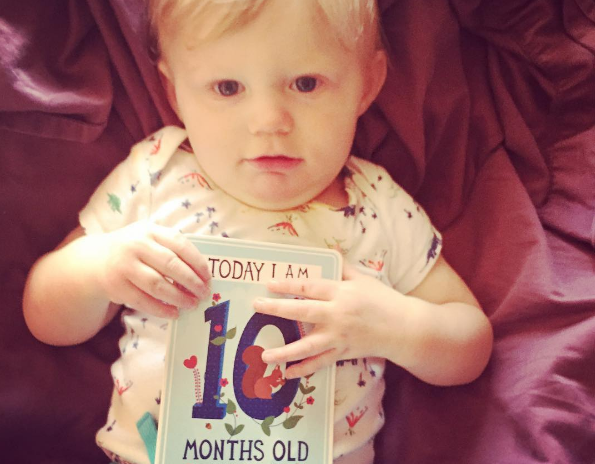 It is taking me forever to get this update together. After being on vacation, having a lot going on at work, entertaining visitors — boy we have a lot to catch up on!

Another month gone by — how is it so? Every time I do one of these, I look back at past updates and can’t believe how little he was — and how I’m not sure I realized it then. I keep marveling at how big he is but one day soon 10 months will seem the tiniest of tiny. 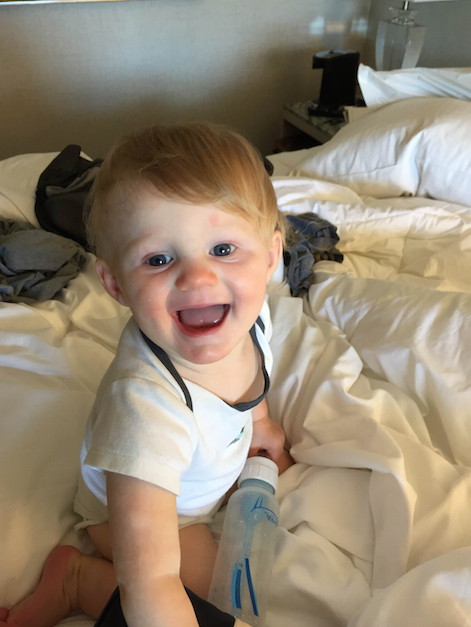 New Stuff: He is halfway crawling on his knees, halfway keeping with the Army crawl on the elbows but boy is he fast. This kid looks like he is an Olympic swimmer when he gets going on his elbows. It’s hilarious — and scary. We finally got gates up on the stairs. He stands at the bottom shaking on them like he’s trying to get out of prison. He often acts like he’s trying to stand up and walk on his own but that ain’t happening anytime soon. I’ve read kids have walked as young as 10 months but I’m guessing he’ll be at least a year.

Food: Finally switched over to more “real” food. He still drinks quite a bit of formula but we are having about three “meals” a day. It’s most purees and packaged baby food with chunks but I often feed him whatever I’m eating as well. I have seen so many moms doing Baby Led Weaning but haven’t really done it myself. I’m not against it but it doesn’t always work out with what I’m already eating plus I still get nervous even feeding him yogurt melts and Mum Mums. Michelle warned me that one reason to feed them regular food now is so they will get used to new textures and not only want smooth foods as they get older. I’m probably not doing things totally the right way but I figure…he will survive and thrive as long as he’s getting the right nutrition. 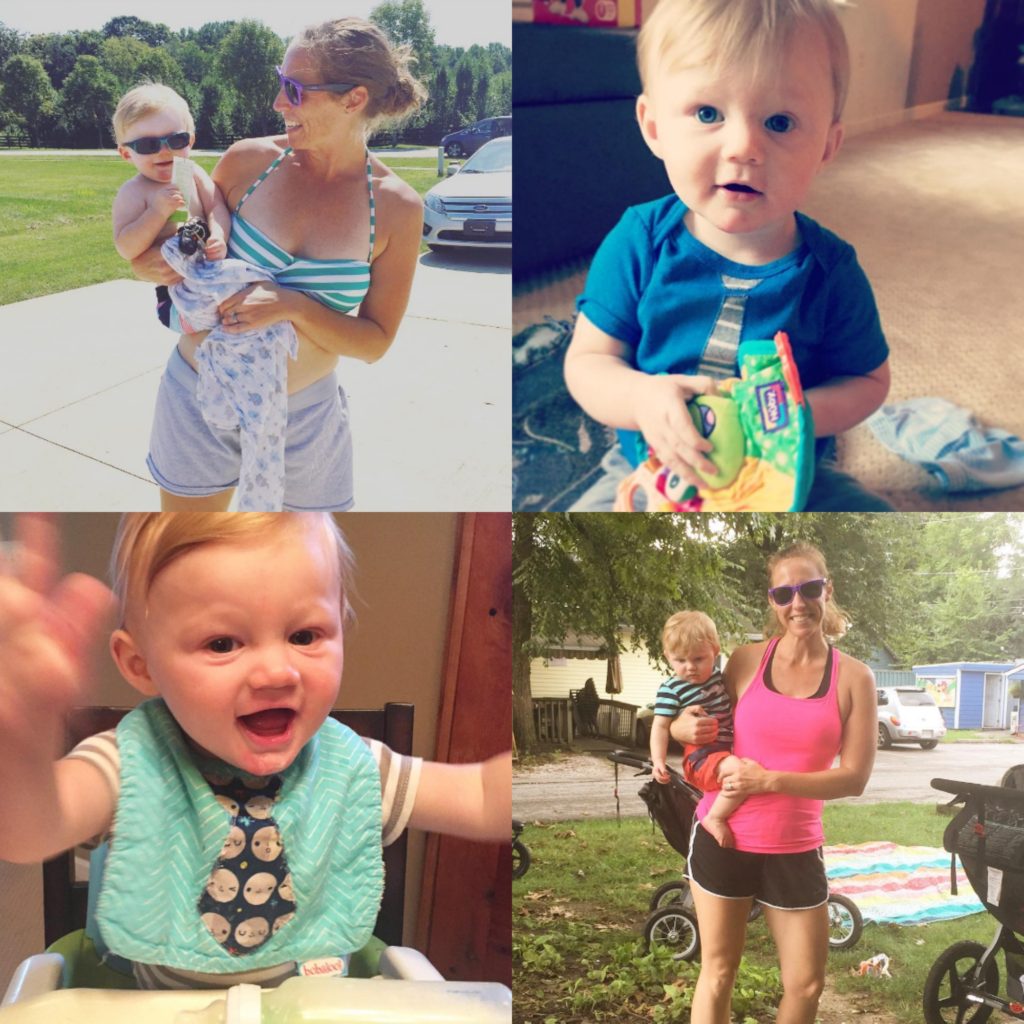 Sleep: We have hit the sleep jackpot in the past three weeks. He’s been (jinx double jinx!) sleeping all night every night. I mean…it’s kind of amazing and I know we’ve been SO lucky with sleep. Even on vacation, he slept all night and nothing seemed disrupted when we got back. Of course, he still has ZERO teeth and I know when he finally starts teething, things will likely change.

Temperament: Well, everyday the smiles get cuter but boy is he hard to keep entertained. He will rarely sit by himself and play for long anymore. I used to get a good 30 minutes out of that but now? If we are in eyesight, he wants to be…on top of us. My hair gets pulled a lot, as well as my faced climbed all over. But the kid is generally HAPPY. So easy to make laugh and play games with. He loves to have us “chase” him or play “peekaboo.” He loves if I tap the car window and wave to him from the outside. He’s mesmerized and awed but every new thing. He has a hearty, sweet laugh that I can’t get enough of. If I’m away from him for any time at all, I miss it and though he can be exhausting, I am never annoyed by any of it. 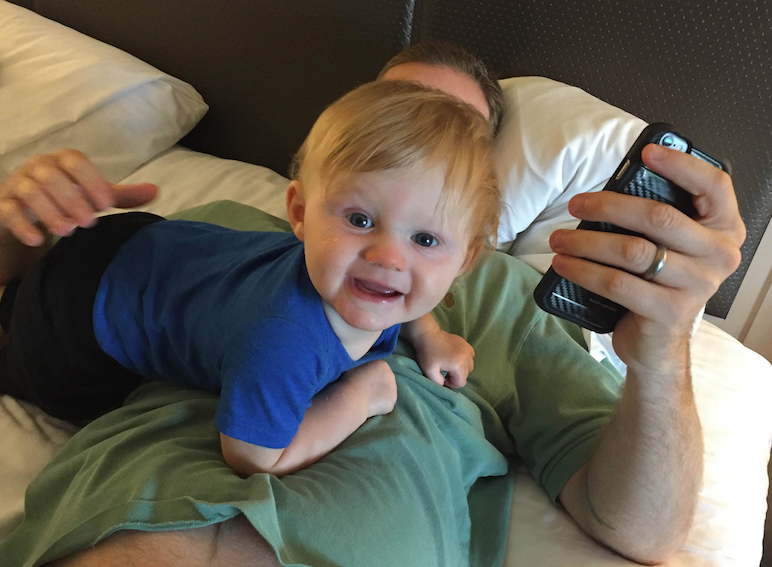 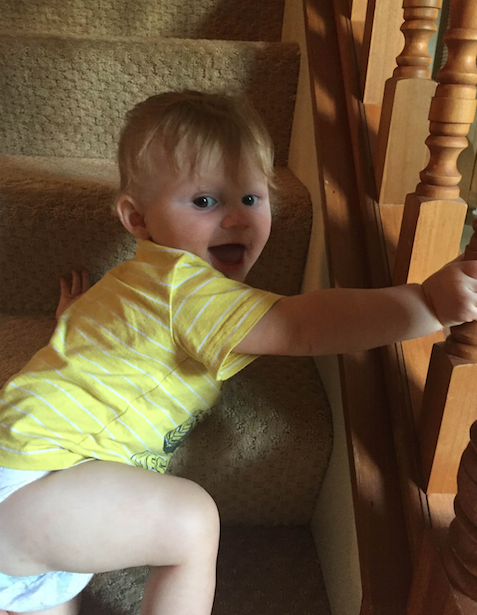 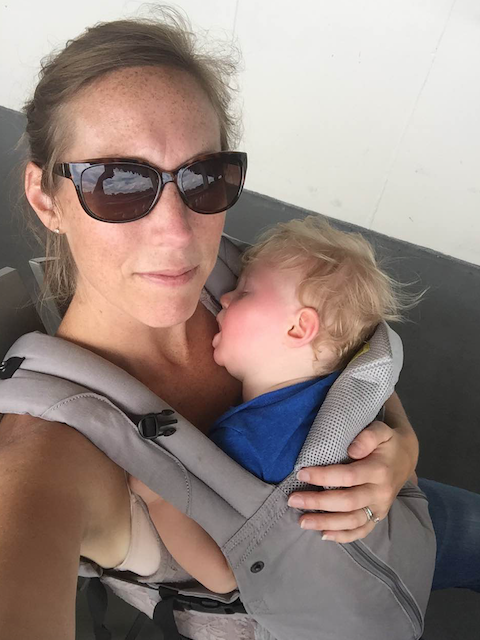 Daycare: Because he requires so much attention in the present moment, getting any work done at home has been nearly impossible. Just today, I signed up to have the option to take him to daycare all 5 days. I’m hoping to use it sparingly. Now I will be able to take him any day of the week instead of just Monday, Tuesday & Thursday, which gives me more flexibility if I have a lot of work on say a Wednesday. My plan is to continue going to stroller group and MOPS, among other things we do together, and then just take him for a few hours in the afternoons when I need to get things done. I also hope to keep him out one day a week totally if I can manage it.

I hate to add more hours to daycare but I have gotten to the point where I simply can’t get my work done efficiently those days anymore. I’m sure I will get used to it but it still hurts my heart to do more daycare. The irrational part of me says I’m not trying hard enough to make it work. The rational part of me says…what kind of superwoman can get work done with a 10-month-old child who hates naps crawling around the house? 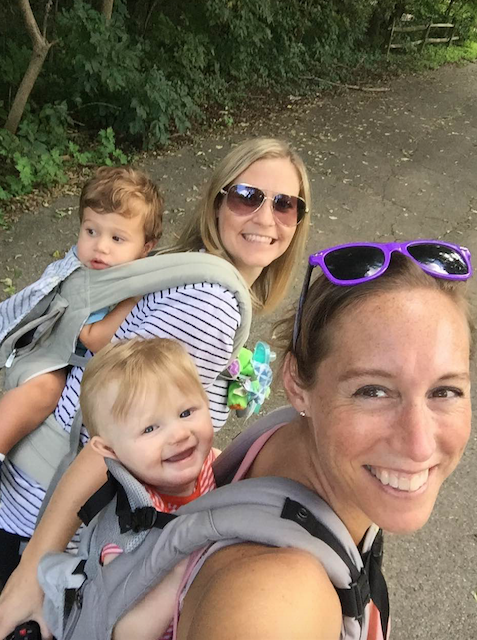 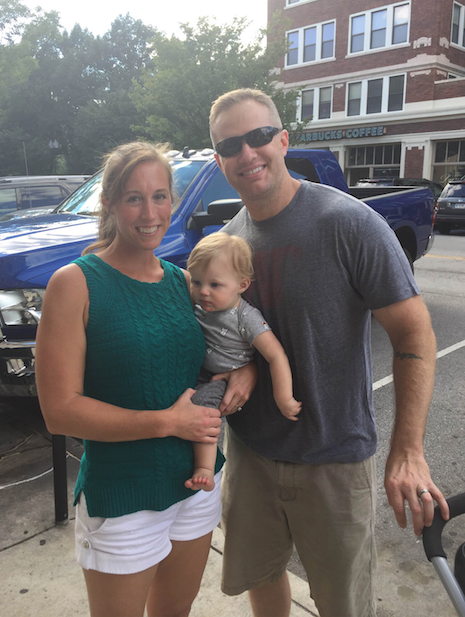 Parenting Update: Things have gotten “harder” as a parent as he gets older but thankfully, smoother as co-parents. We have a rough start together with a newborn but Rick and I have learned to work together pretty well these days and I’m so thankful for that. He is, of course, an amazing Dad and you couldn’t ask for a more hands-on baby Dad. I knew he would be like this before Jacob was born and I think wow, what a lucky little guy Jacob is to have such a great Dad.

As I’ve always said, being a Mom was actually easier than I expected in some ways. The day to day, diapers, playing, Mom-ing is mostly a joy and I love being a Mom. The emotional side — fears of SIDs, fear of something ever happening to him, irrational thoughts of awful things that could happen to him — is much harder. Though that has gotten easier, I still have a much harder time hearing about tragedy or anything awful that happens to kids. Like when the little boy was killed by the alligator in Florida or when I see a child on Facebook has cancer. My heart grows fearful like it never would have before. I know I cannot live in fear or worry — that’s an awful way to live — but I fear I would not be strong enough for something like that. Okay but why am I even bringing this up? Who knows, just on my mind.

Rick takes him out for yard work everyday in the Lillebaby — how adorable are they?! 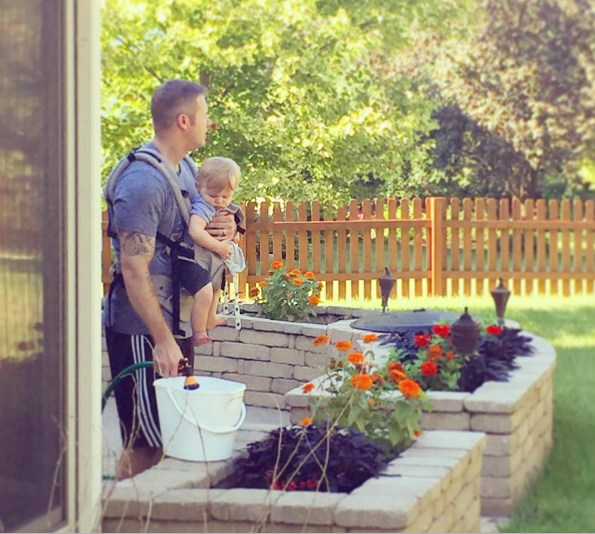 Lastly…: Jacob is a smart, strong, happy boy who is moving along at just the right pace. He seems to love people, laughter, trying new foods and being in nature. He is truly the light of our lives and we’ve never been happier together.