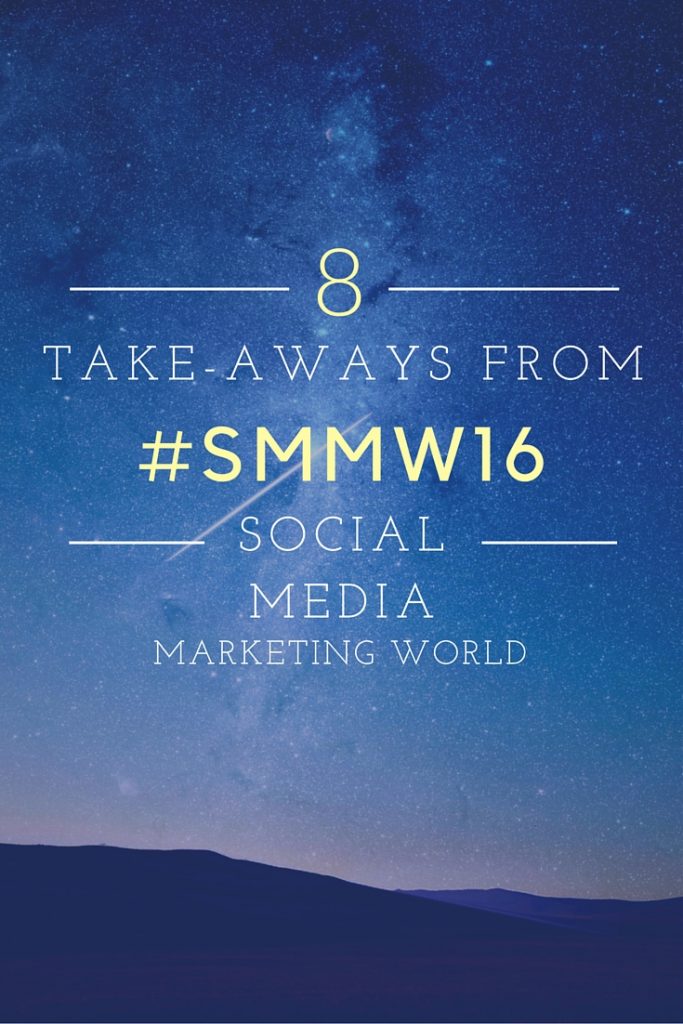 I was extremely blessed to be able to attend the Social Media Marketing World Conference in San Diego this week. It’s a little like SXSW but more refined & less overwhelming! I love that every speaker & attendee is so passionate about social media and it’s fun to be around people that speak your career language. Here are some of the top things I learned, though there’s more t come because I still want to watch all the sessions I missed on the follow up videos!

1. Live Video. The BIG take away from this conference was this alone. Live video is the present AND the future. Facebook recently opened Live to all users and it easily disrupted the popularity of Periscope (there was some negativity about Periscope.)

Social media legend Guy Kawasaki said he’s not even using Periscope anymore because he gets 30x the interaction & viewers on Facebook with 1/5th the followers.

Periscope isn’t going away but top strategists like Kim Garst urged Twitter to consider getting it directly embedded into the platform stat. As awkward as live video can feel, people are compelled to watch it — and they do so for much longer and engage far more than they do other kinds of videos.

Brands, businesses & organizations better get on it. Eventually, there will be ad revenue involved but we aren’t there yet. 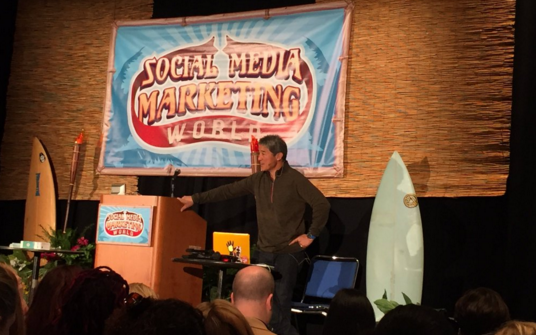 2. Snapchat is Still Buzzing. I’ve been avoiding Snapchat since it started. I don’t like it, I don’t want to use it but it was clear from this week that I have been making a mistake. It’s actually a bigger thing than I realized and while it might not be around forever (like anything else), it’s hot NOW and you need to be on it. As Gary Vaynerchuk stressed on Monday night, it doesn’t matter if something will eventually go away, you have to invest in what’s currently working — and Snapchat is (and he’s kinda obsessed with it right now.) 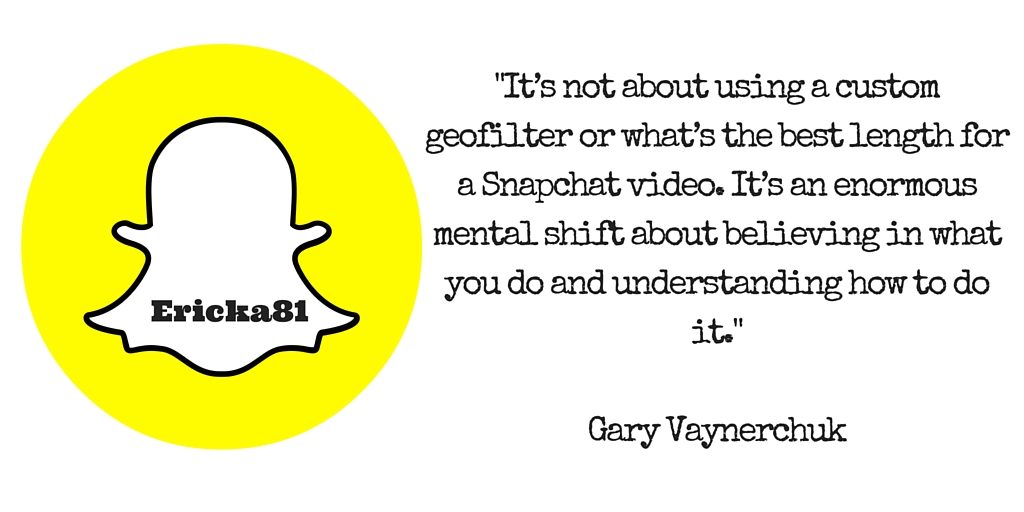 As for the big publishers that have daily Snapchat news, well — we don’t have the resources to do that, but we have to get started. There are over 6 BILLION video views on Snapchat everyday. Where there are eyeballs, there are opportunities and I’ve been missing out. Snapchat has a stickiness factor (like live video) because it disappears on 24 hours so people are compelled to watch when you post or send.

3. You Have More Instagram Potential Than You Think. I kind of already knew this but after a presentation from Foundr Magazine, who has racked up 742,000 followers in a year, I was wholly inspired to move more on it. Here are a few tips:

There are SO many massive Instagram accounts & you can follow their successful leads by implementing some of this stuff. It definitely takes a persistent, consistent, concerted effort tot make it happen but it can be done.

4. Blab is the Hot, New Thing. I actually just heard of Blab recently, through Colleen’s segment, Taboo Mom Talk. I thought it was cool but hadn’t play around with it much. It’s a live interview forum, where two or more people can talk at once and go live – like Google Hangouts really but everyone’s conversations live on one platform and you can just pop in whenever you want to watch them. All the speakers seemed VERY big on Blab, the CEO was there and I was inspired to experiment with it for sure. 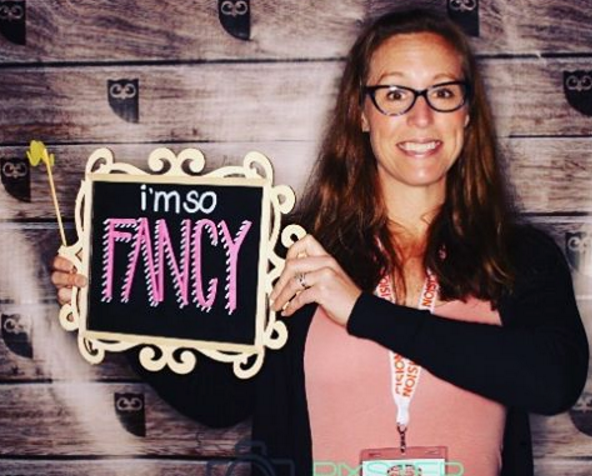 5. Canva is Beloved. Canva had a big presence at this conference and was mentioned a lot. Guy Kawasaki is an investor and influencer for them. They are said to be “democratizing design” by making it easier for everyone to create artwork online. You don’t have to convince me, I’ve been using Canva for well-over a year but I think I have a lot yet to learn about using it better. Graphic designers may cringe at this development but like Uber & other innovative companies making things easier for us average joes, you simply MUST adapt & figure out what works with the change. By the way, I made all the graphics in this post on Canva.

6. Everyone’s Got a Meerkat Joke. I can’t tell you how many times I heard a speaker make a crack about Meerkat, the short-lived live video platform that was quickly eclipsed by Periscope last year. For about a week, it was the IT app and then it died. I felt bad for the creators of the app if they were around or watching!

7. E-Mail Still the Tool We’re Using Wrong. After all this time, you’d think people would get email but they don’t. You’re still not segmenting, targeting & personalizing the right way for your audience. And it doesn’t have to be super complicated! Start with dividing your email list into three buckets and treat the groups differently. Figure out who they are, what they want and how you can deliver on their needs & wants. Open rates & click throughs will sky rocket. And don’t be afraid to ask them what they’re looking for.

8. Your Facebook Ads Don’t Have to Suck. People get so frustrated at Facebook for “making” them pay to be seen but hey, FB can do whatever they want. We have to adapt and if you are doing ads wrong, it’s going to be expensive. I heard from both Jon Loomer & Amy Porterfield on this subject. Jon’s main take away was that you don’t have to deliver ads to people who don’t want them! But you have to set your ads up in a way that phases out the people who aren’t clicking or taking action. I can’t get into the logistics here but think about valuable that would be & check out all of the resource’s on Jon’s sight for guidance or training. 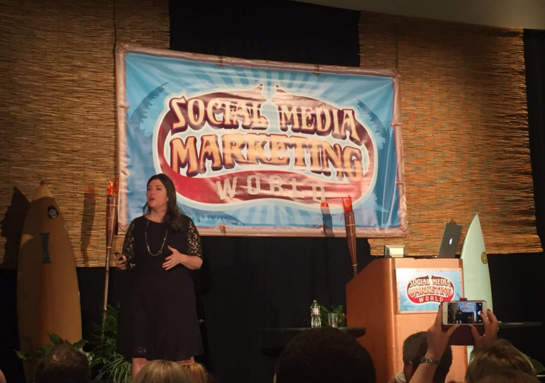 I already knew this but need to do it: Strategically targeted your content toward people who have already show interest in it by using the Facebook pixel. With the pixel, you can target folks who visited specific articles….so you know you are hitting a specific kind of reader who has already expressed interest in a particular kind of content. Without this targeting, you are throwing spaghetti at the wall but have no idea if it will stick. Get more targeted & you can actually predict what people will do. You can get super in the weeds with this & test all day long but it’s worth it if you get your click through rates down & your page views up. 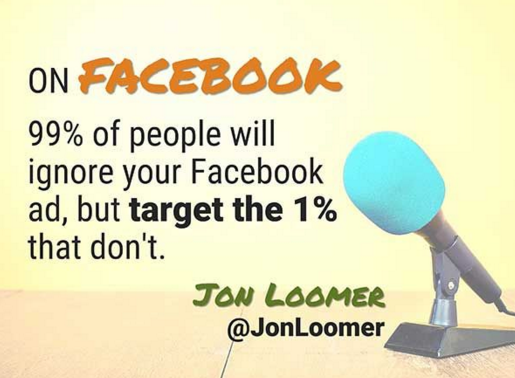 That was long and still didn’t cover everything I learned! I certainly came away inspired and excited to get started on some new things for National  Review & my personal accounts. This world is always moving and you need to jump on early. Live video is NOT going away people so figure how to make it work for you!