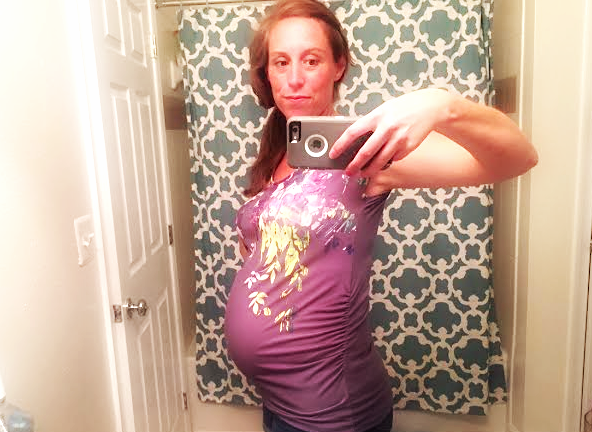 I mean, who doesn’t love a good bathroom selfie? I figured I would wait to bug Rick for some better photos until we’re closer to the end. I have considered getting those pregnancy photo shoots but I doubt I will — don’t wanna spend the money!

So, here we are at 30 weeks, 2 days! I still feel like I’ve been pregnant forever and 2015 has most definitely been the longest year of my life but…holy goodness I think 30 weeks is finally the week everyone can tell I’m pregnant. It’s amazing how long it took for this thing to pop!

Bump: Yes, as mentioned, bump is out there. My maternity clothes finally are starting to fit correctly and look cute. I’m a cute pregnant lady! Thanks to my sister for loaning me a bunch of her clothes because I was running low. That’s her shirt I’m wearing up top. Despite bump being bigger, I don’t notice it being in the way or anything…it’s just there.

Body: Many people say they notice puffiness and other parts of their bodies feeling much larger in pregnancy. So far, I’m not experiencing that. Course I have 10 weeks to go. My arms & legs have lots definition but I blame that on quitting CrossFit & running. My face, feet, hands, etc. haven’t changed much at all.

Nausea: I get it occasionally but it doesn’t last. Thank goodness!

Appetite: My appetite, again, doesn’t feel any bigger than before. However, I work out a LOT less that is probably how it evens out. Mostly, I get fuller on less food and feel really uncomfortable a lot. I have heartburn frequently! I’m trying not to overindulge because I’m pregnant, though sometimes I do. It’s all good!

Energy & Exercise: Energy levels come and go. Some days I feel SO tired and think, how will I handle working a full-time job when I have a baby keeping me up at night — if I can’t even handle this? It will all work out but energy stocks are used up quickly. I exercise a little less now…probably more like three times a week depending on if I’m traveling or something. I’ve been trying to keep up arm workouts twice a week so I don’t lose all muscle. I incorporate lots of walking, stretching and try not to let more than a couple of days go by without a workout. 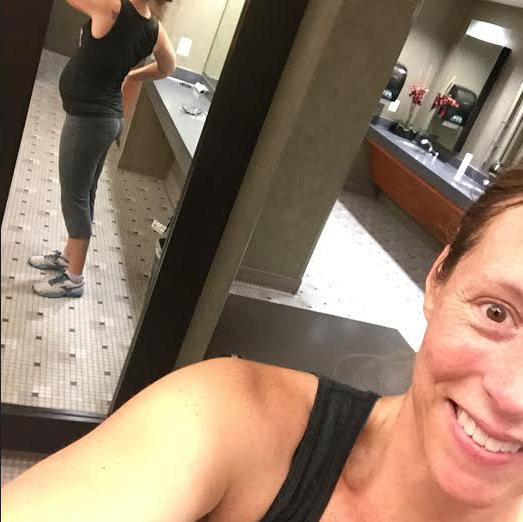 Sleep: Still sleeping just fine for the most part. I have some weird back pain in the middle of my back that often acts up and makes it hard for me to change positions. The belly also makes it hard but once I’m settled, I stay comfortable. I have been sleeping with the Snoogle — which I like, though usually toss out of bed around 3am. I can’t stay on my left side ALL night long. Getting up STILL hard, especially when I think about how little I will be sleeping soon.

Kicks: Kicks are frequent and fierce. Things have really changed in the past week. The movements feel much bigger and active. Like it feels like there’s a REAL baby in there! Yesterday, he was kicking so much my stomach was moving all over the place. He’s like, get me out of here! I can’t believe he’s really in there, just chilling.

Stuff: We have lots of stuff now — swings, Pack n Play, toys, clothes (thank you SO MUCH to my best friend, Michelle, who generously donated all her little boy’s old clothes to us because she is having a girl!)

Books & Classes: We took a labor and delivery class, which was helpful but again, not sure if I learned anything that valuable. I kind of gave up reading books — it all started to sound the same. I continue to read blogs and Baby Center but that’s about it.

So yes, we have 9.5 weeks left before this little baby boy makes an appearance and it’s getting more real by the day. It sill feels insane! Being pregnant, aside from the first trimester nausea, hasn’t been so bad. I don’t mind it for the most part — and I wouldn’t have believed i would say that in those first 12 weeks. Ugh that was awful!

So that’s the update for now. Stay tuned for more coming soon!