Will Hillary Clinton Do Yoga With Me? 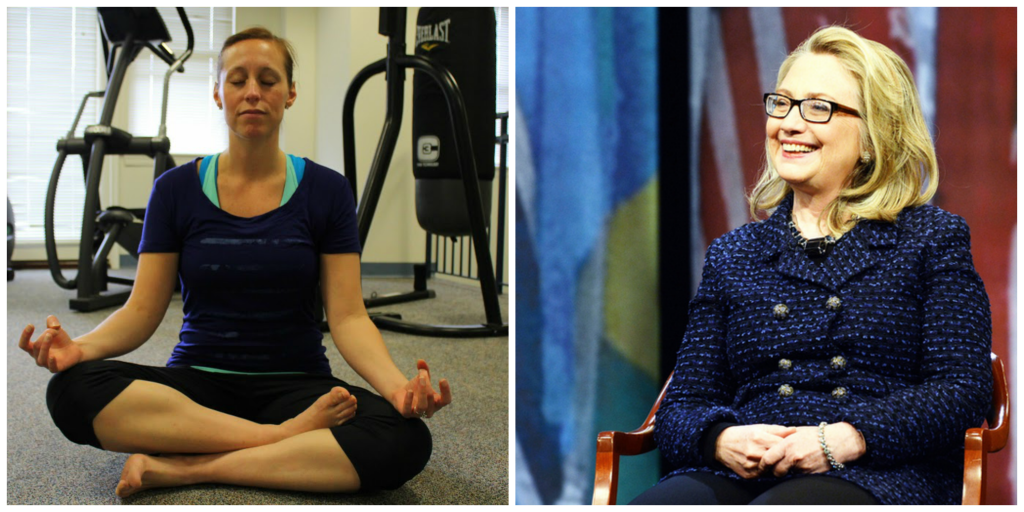 I know, it sounds crazy — but after she talked about her personal emails including yoga routines in the presser  — I had to ask! So I sent her a tweet asking if she’d meet for a class at my yoga studio, Mind the Mat.

Dear @HillaryClinton — will you come do a yoga class with me at @MindtheMat? A conservative (me), a liberal (you) can bond over some “oms”?

Now, I know she’s really busy with her professional duties and all — perhaps running for President, or so I’ve heard — I think it would be a good PR move for her to engage this conservative Yogi (I mean, beginner who does yoga) in some bipartisan sweating.

All kidding aside, I would totally welcome a mat session with Madame Secretary, but hopefully she’d let  me call her Hillary because it’d be kind of weird to be all professional while we were wearing Lululemon.

I live in Washington, DC and you know I don’t talk politics on the blog but anyone that follows me on Twitter can figure out my politics in about 2 seconds. Thankfully, that hasn’t been a problem for most people. I’m glad the sport of fitness can bring us all together in common sweatiness to work out life’s problems together.

That’s why I really loved the #IfEverybodyRan campaign by Mizuno….how much better would we all feel if we tried solving problems while we were out on a run together — or doing yoga together — or lifting weights together? Just some amount of physical exertion for a great purpose than just the conversation.

Yoga, especially, is a great place for people of different mindsets to come together. It’s all about accepting who we are, where we are and find your own personal best in that moment – -not beating yourself if you don’t “live up” to some kind of standard.

I don’t think world leaders can solve the crisis in the Middle East doing yoga together. I don’t think I could convince Hillary Clinton that she’s wrong about healthcare — or she could convince me I’m wrong about education. But maybe if everyone was required (I mean, it was suggested 🙂 that we all spend 20 minutes working up a sweat before the tough conversations, a different kind of perspective would emerge.

Perhaps not. Either way, if Hillary Clinton does yoga with, she’ll be a hit with all the yoga moms out there and you know that community growing like crazy these days!