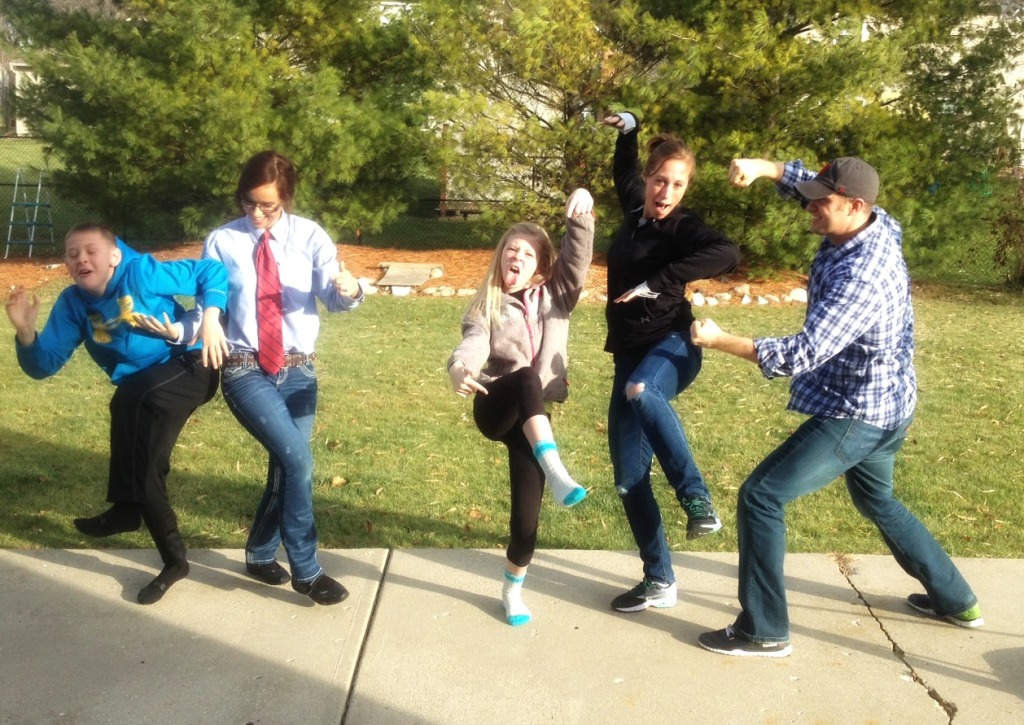 *With our nephew Nick and nieces Emily and Caitlin!

Hello friends…hope you had a nice Thanksgiving weekend. I know, I’m late to the game on this one! I can’t tell you how happily busy I’ve been. I’ve had some freelance work, which has left me little time to blog lately but I’m happy to have it!

It was a bittersweet Thanksgiving for our family. On the actual day, Rick and I were here in DC. It was the first time I’ve ever eaten Thanksgiving at a restaurant, that’s for sure! We had planned to go to Indiana before but plane tickets were insanely expensive. Since the main reason for going was to attend my Grandma’s memorial service, we waited until Friday, when they were half the price.

I have a pretty tight knit family extended family but it had been awhile since we were all together. Fortunately and not, funerals bring you together in one place — even the world traveling 22-year-old cousins and exciting college freshman who are normally running around doing young people things when their parents visit. It was great to see all of my cousins on my Mom’s side as we gathered to honor the woman every one of us admires deeply. 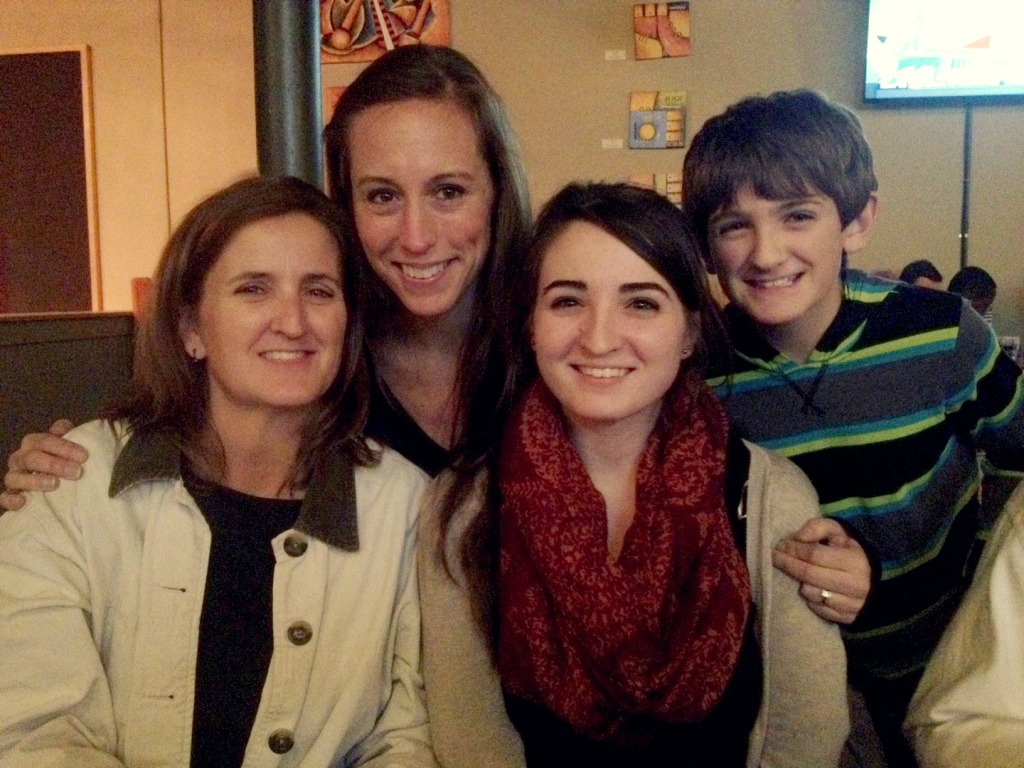 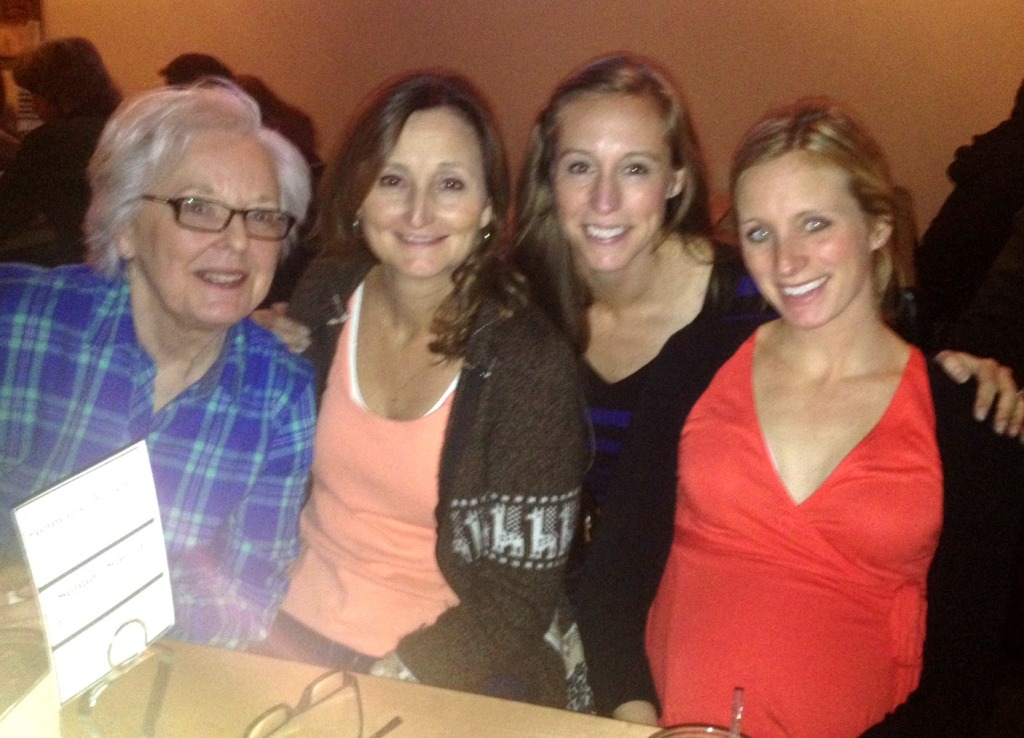 It was odd, the day of the service. I was in a good mood because it was just so great to see everyone but it felt odd to be in my Grandma’s church with all the people she loved, without her. She would have delighted in being among all these people and probably looked down from heaven and smiled. Thankfully, two years ago, my grandparents had a big 50th Anniversary party, in which nearly all of these same people were able to attend. She enjoyed every second and even then, she knew it was probably the last time that kind of situation would ever be. Cancer could strike at any time.

The service was beautiful. It began with a slide show and music of photos from photos all throughout her life. It was so hard to watch — Grandma as a 19-year-old bride, as the young mother of my own Mom in 1961 and a bell-bottomed wearing mother of 3 in 1972. Somewhere in there, I appeared first as a newborn, then as a sweet 4-year-old and a cheesy 11-year-old.

There were many photos of Grandma with her best friend, Margaret, as well. You won’t find many best friends as tight as they were. Margaret is family if there ever was family to. Then there were photos with my Grandpa over the years on exciting trips they’ve taken to Nashville (they liked the Opryland hotel!) and down the road, Grandma with her great-grandchildren — never without a smile, always just glad to be in the presence of those she loved. 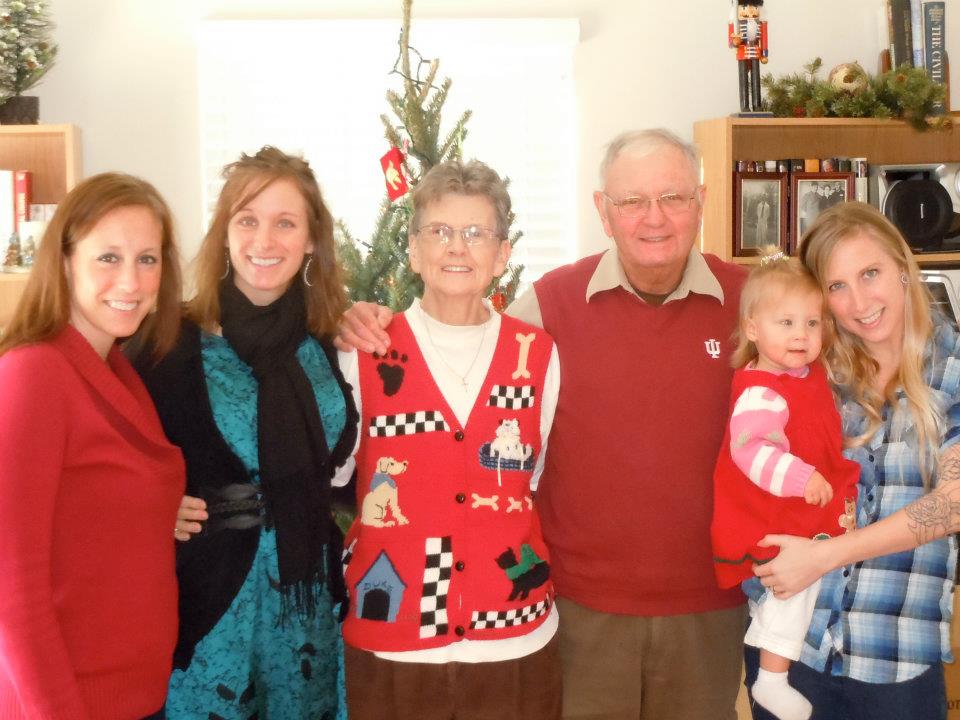 After the slideshow, I was supposed to get up on stage to say a few words. It was tough. My grandpa spoke first — and he did a great job. He talked about how much my Grandma loved yard sales and how if she ever saw one on a road trip, she’d exclaim, “Oh there’s a yard sale!” with such delight, there was no way they weren’t stopping! He said the sweetest things about the woman he’s spent over 50 years with and read a poem he found that had us all in tears by the end.

Well, then it was my turn. I know what I wanted to say but the combination of being on stage (it was a high stage in front of a decent-sized crowd), crying and not being exactly sure how my words would come out got ot me. I kind of choked and was unable to speak very well. The emotion of it all overwhelmed me. Eventually, I was kind of able to say what I wanted, which was this:

When I was a little girl, I loved the Amy Grant song, “My Father’s Eyes.” It’s a song about seeing the world the way Jesus does.  The lyrics are:

Eyes that find the good in things,
When good is not around;
Eyes that find the source of help,
When help just can’t be found;
Eyes full of compassion,
Seeing every pain;
Knowing what you’re going through
And feeling it the same.
Just like my father’s eyes

I have prayed for years that I would have my Father’s eyes in this way. And I realized that God gave me the best example of that being lived out on earth through my Grandma. She was all of those things and more — compassion, kindness, forgiveness and love.

The end of the song says:

And on that day when we will pay for all the deeds we have done,
Good and bad they’ll all be had to see by everyone.
And when you’re called to stand and tell just what you saw in me,
More than anything I know, I want your words to be,
She had her Father’s eyes.

On October 31st, my Grandma left this earth and went to meet the Jesus she has lived for and loved for 73 years. And when she stood there in front of Him, I’ve no doubt she was commended for having her Father’s eyes all this time. For bringing love and light into a broken world — for loving the unlovable, the weird, the irritating, the different and every kind of person you can imagine. 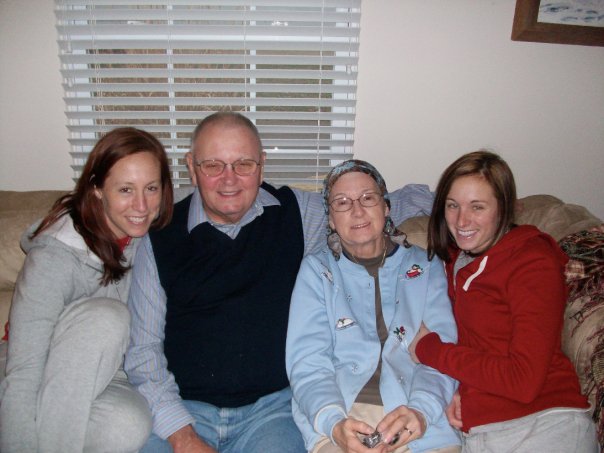 I wasn’t able to get things out like I wanted on stage. In fact, I was kind of embarrassed and couldn’t figure out how to get off stage fast enough — but I know it wasn’t about me and my “presentation.”

My aunts followed me up with their own, more light-hearted talk about all of Grandma’s beloved clothes — like the t-shirt she still wore regularly of my 22-year-old cousin’s face when he was 3 years old and the Bloomington North Band shirt from 1987 (my aunt was in band) that she simply would not get rid of! They talked about how she would literally give you the shirt off her back if you liked it. That’s just the kind of person she was.

After our talks, the pastor of her church came up to speak. He spoke candidly about how Grandma emailed him regularly on Monday mornings and that in October, she sent him an email just after her last service as church. She wrote to him, “I don’t know if I will be able to make it to church again, but if that’s the last sermon I ever hear, it’s a good one to go out on”  [I may not have that 100% correct but close enough!] and asked him to preach the sermon at her funeral. 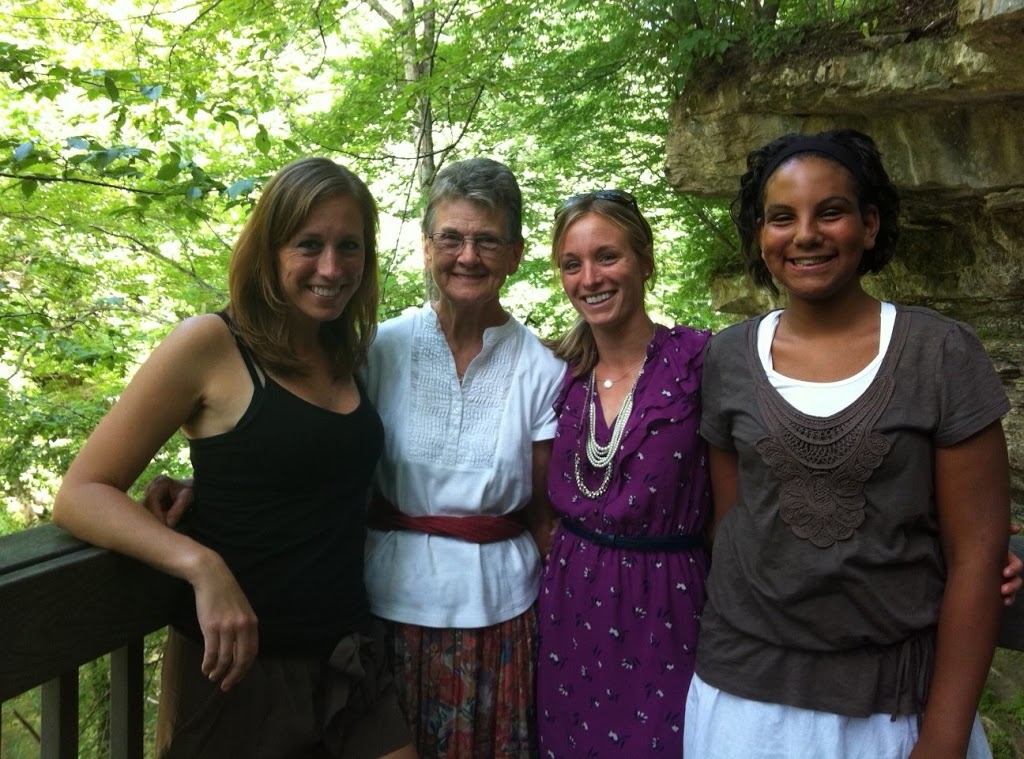 Of course, the service included an opportunity to accept Jesus into one’s life if it was a decision people wanted to make there — because you cannot have a memorial service for Carole Allen without that, that’s for sure.

I could imagine her planning her funeral — really, what an opportunity to make sure all the things you want shared are shared. I would have liked to listen to stories about her all day long, honestly. She was a beloved woman who no doubt made impressions of love on people everywhere she went. There are people who don’t know her name or know that she died or much about her at all, that remember the woman who showed them kindness on a hard day.

There’s an old quote that says: “Preach the gospel. If necessary, use words.”

I can’t think of anyone who lived it better. As I sat down yesterday to read my Bible, I found some great verses on love and wanted to share one with you.

I’m clinging to that verse and I’m clinging to what my Grandma represented and will honor her memory by honoring Jesus with my life the best that I can. I say that and I’m scared to say it out loud because the world is watching and I am just a sinner. But I want to do that.

The service ended and we sang, “When We All Get to Heaven” because that’s a happy song about death and they probably welcomed her in with it. She wouldn’t have wanted sad songs — she’d have wanted us to smile and fellowship and go off to be the best people we can be.

So that was that and now it’s over. We’re back at home and Christmas is coming — which will also be tough without her. But she and my Grandpa sure created a great family and that love extends without end — and I am so thankful for it.

Mom, my Grandpa & I after the service: 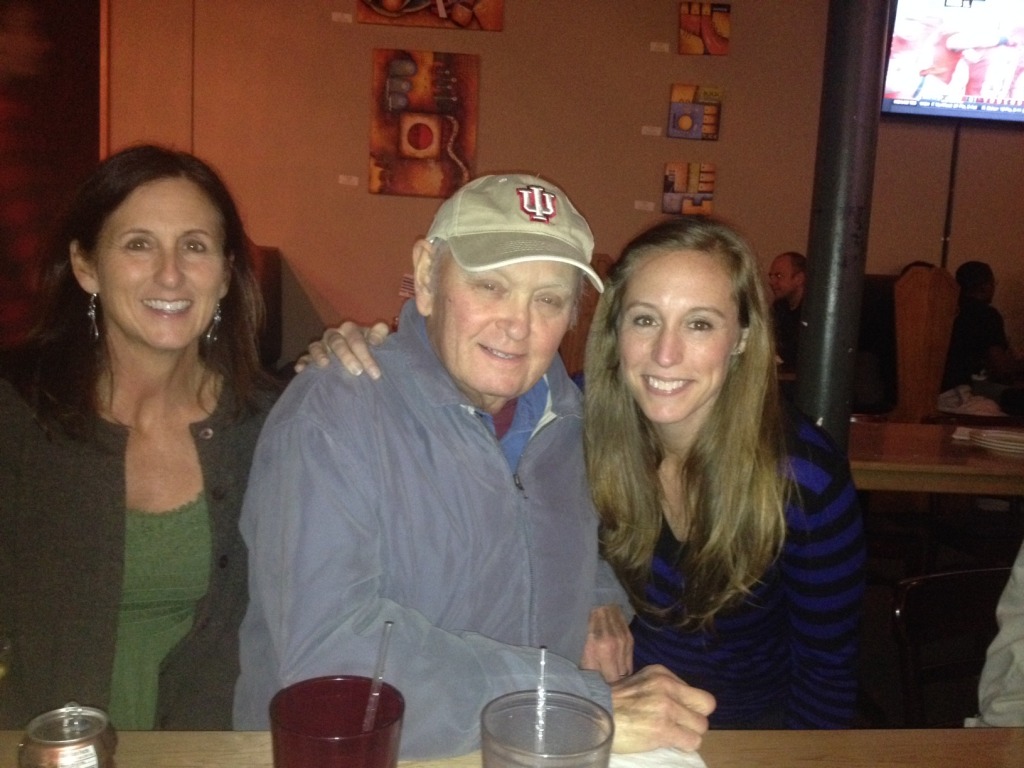