Is This a Marathon Slump? 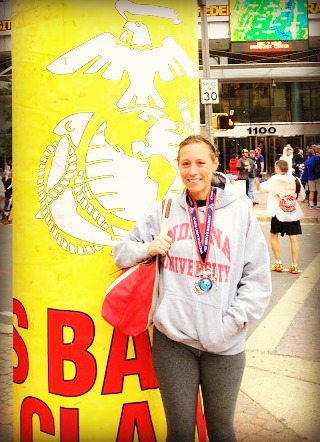 Today, I’m buying a bib for the Marine Corps Marathon through the transfer process. But, I don’t know if I’m going to run it. I definitely want the option…but it got me thinking about the marathon slump I’m feeling.

Last year, I was pretty upset when I had to give up running the Marine Corps Marathon and then drop out of the Richmond Marathon 4 DAYS before the race. My back had given me a run for my money — and I had trained through it —  but it broke down with no hope of working for race day.

I cheered on MCM with two homemade posters by myself, screaming my guts out for runners at mile 23 — willing them to the finish line. Then, I drove with Maggie to Richmond to cheer her on in the marathon we had both signed up for. It was bittersweet.

When my back was “fixed,” I was excited to run again and to train for a fall marathon.

Now that I’m here, I’m not sure I want to train for a fall marathon. Falling in love with CrossFit in the past two years made my desire for the marathon fade a bit. Though I did run three marathons in 2012, I had to quit CrossFit for that time period and only focus on running to get it done.

I’m beginning to realize that no matter how accomplished I feel after a 20-mile training run — they are the bane of my existence the entire week I think about doing them.

Since I’m not super aware of what exactly screws my stomach up sometimes, I run into stomach issues half the time I plan a long run. It sucks.

If I train for a marathon, I’d like to get to 50 miles a week and well, do you know how hard it is to fit in 50 miles a week? Like really hard. I did it in 2012 and felt like all I did was run, even though I know plenty of people go way higher in mileage than that.

If I didn’t have CrossFit to fit in, I think I could do it but I will not abandon CrossFit because it keeps me stronger and gives me a better overall fitness that I don’t want to lose.

Plenty of CrossFitters actually continue CF and do minimal run training before marathons and ultra-marathons. I could go that route. Maybe I will go that route.

But I’ve run long distances without the run training and I don’t feel like there’s much of a substitute there.

What’s my obsession with the marathon? Why can’t a half-marathon suffice? I think it’s because I know I could run a half-marathon any day without training but a marathon is a beast that takes more than that. It’s hard work, it’s an accomplishment. It’s so much different to me than a half.

I’m not sure I want to sacrifice the time though. It’s ridiculous to go back and forth about this — but only time will tell if I suck it up and train or fizzle out on the marathon scene.