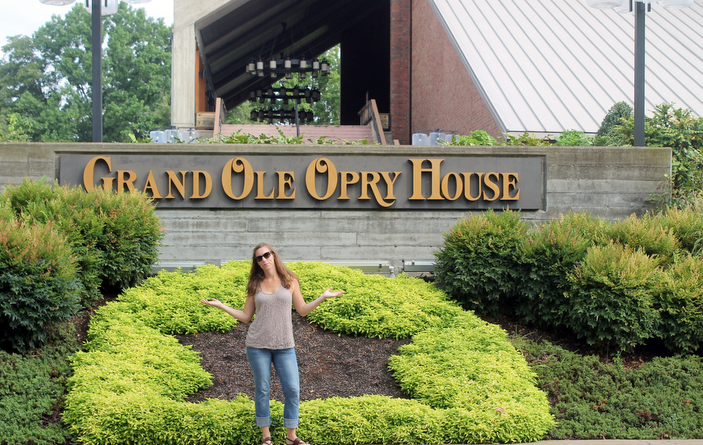 I’ve been to Nashville a handful of times but somehow, I’d never been to the Opryland Resort or to the Grand Ole Opry! Me? Country music super fan? Yes, it’s true — but all that changed this past weekend.

It was our first vacation as a family of three. I wasn’t sure what to expect so we chose somewhere within sane driving distance — 4.5 hours — and not too expensive. 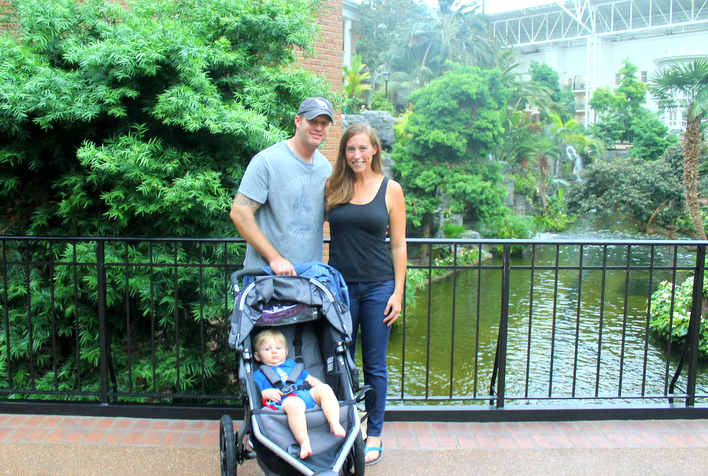 Jacob was a dream on the way there. He slept 3 hours solid, then I hung out with him in the back seat for the last 2 hours and he didn’t cry once. Mission accomplished!

We arrived to the Opryland Hotel — and it is HUGE. The whole thing is indoors, but it’s got a totally outdoor feel, with gardens and bridges and rivers and waterfalls. It’s incredible! It took us three walks around to actually see everything. There are multiple restaurants, two Starbucks, places to shop and it’s connected to a convention center that includes things like a FedEx and more. 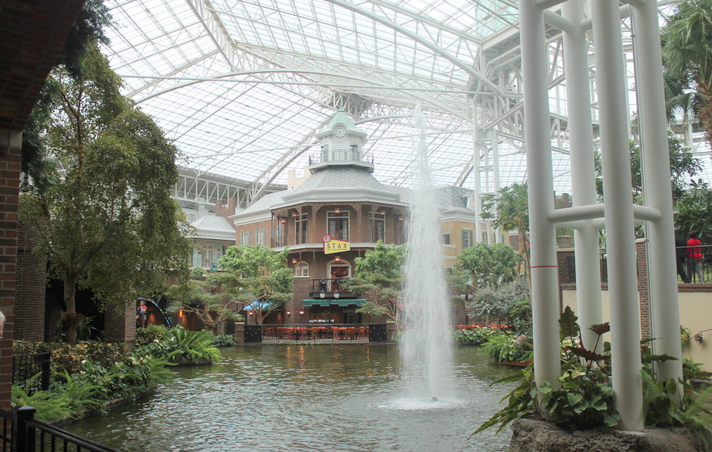 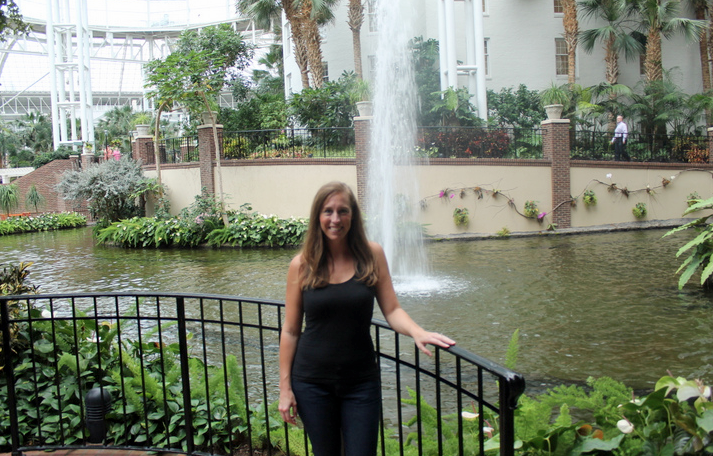 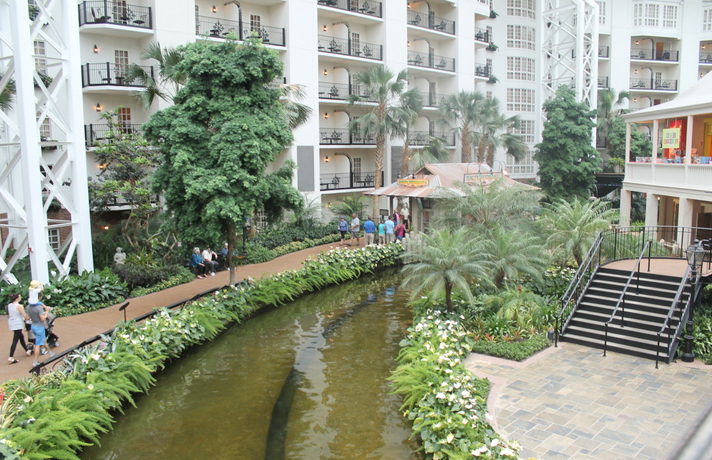 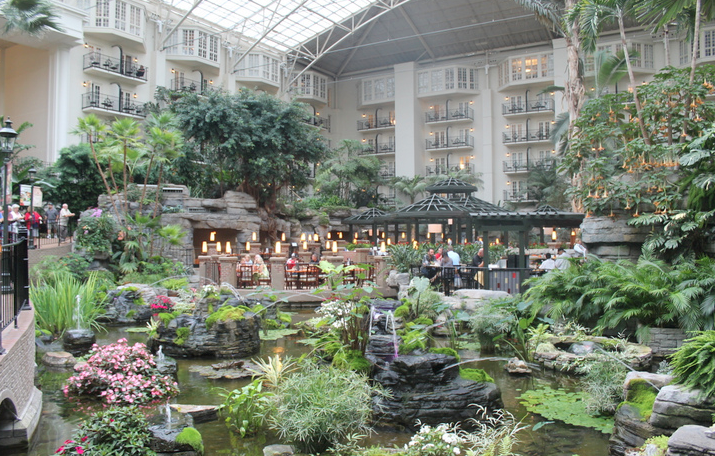 As you can see, gorgeous! And honestly — the price isn’t bad. I think we paid a little over $200/night. Not cheap but doable.

We were SO impressed by the food. We ate at the Cascades restaurant four times — actually for breakfast, lunch, dinner and dessert. I was obsessed with everything I had, especially the brownie sundae, which was super goopy and drippy and fudgy just the way I like it.

We also ate at Solario Cantina — and I had a wonderful margarita with an amazing mexican salad — the kind I NEVER find at a Mexican restaurant. Impressive! 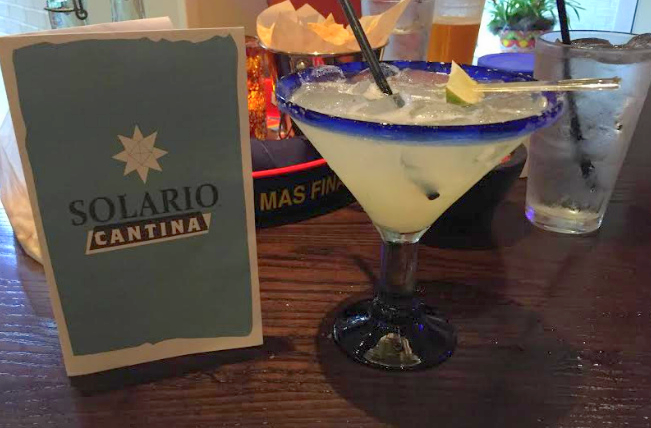 But let me back up! Our first day there was the one I had tickets to the Grand Ole Opry. I had only heard of one act performing — or so I thought. Jacob and Rick were going to come as well but as the day wore on, I thought it might be insane to bring Jacob. With an hour time change, we wouldn’t even be going to the show until an hour AFTER his bedtime — and the poor guy was tired. So, Rick and Jacob stayed behind. Honestly, I didn’t mind because I was so excited to enjoy my Opry experience. 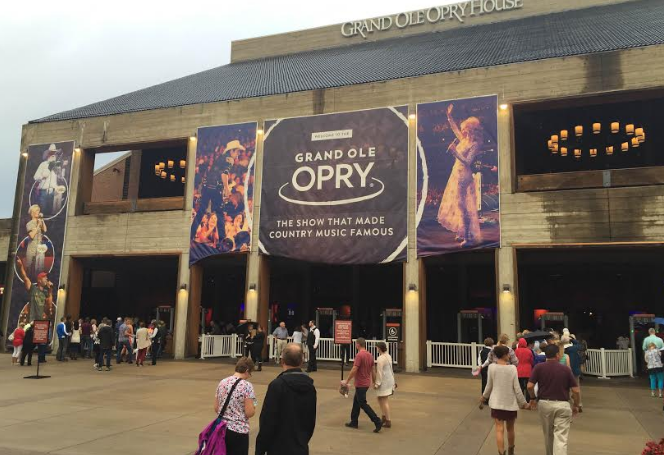 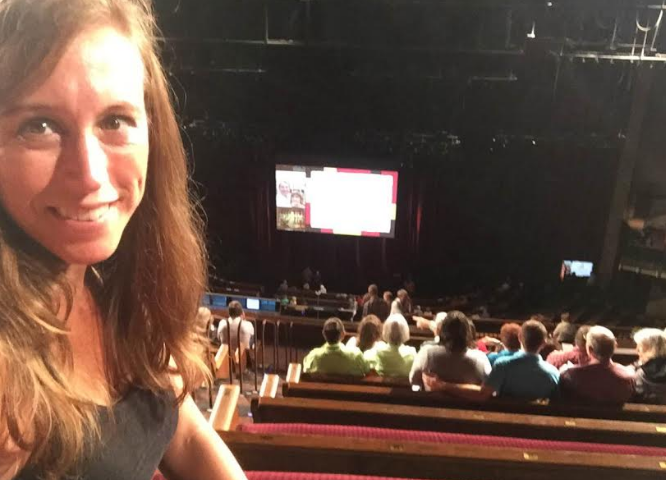 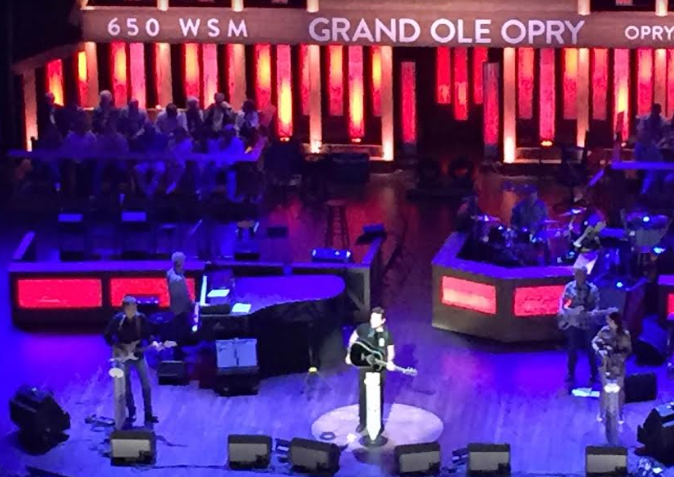 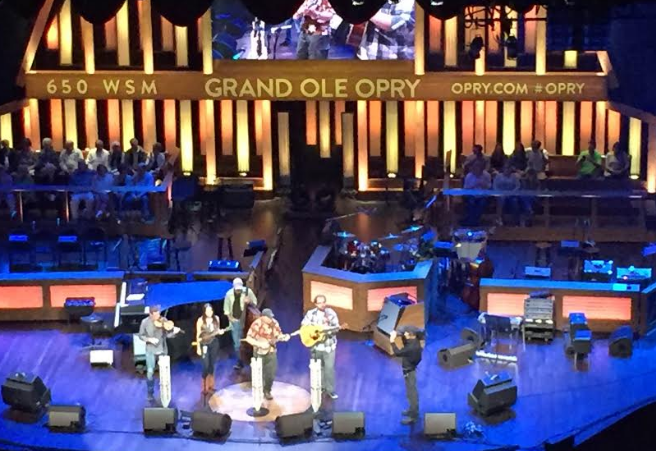 I didn’t mind not knowing most of the singers. I mean it’s the OPRY for crying out loud. Everyone on stage would be amazing. There were several people that were rather legendary but back in the day — like the Whites, T. Graham Brown and Bobby Osbourne. Craig Wayne Boyd won The Voice and Mark Wills has several hits that I know including “I Do Cherish You.” 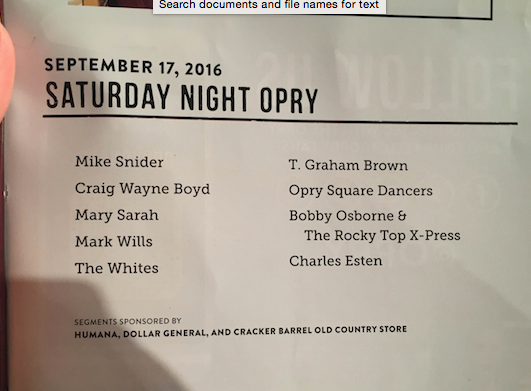 Of course I’m a HUGE “Nashville” (the TV show) fan but I didn’t put two and two together when I saw the name Charles Esten. If you watch the show, that’s Deacon Claiborne! While his photo showed up when I checked in on Facebook, it still didn’t click. I just thought it was like a cover photo they use. Well, as they closed in on the last act, it finally dawned on me. Hello Deacon! So excited!

I loved my time at the Opry. I have ALWAYS said if I ever got my Oprah dream surprise it would be that I got to go to Opry or the CMAs, get front row seats, backstage passes to hang out with the artists I love backstage. Well that definitely didn’t happen but close as I’ve gotten so far! 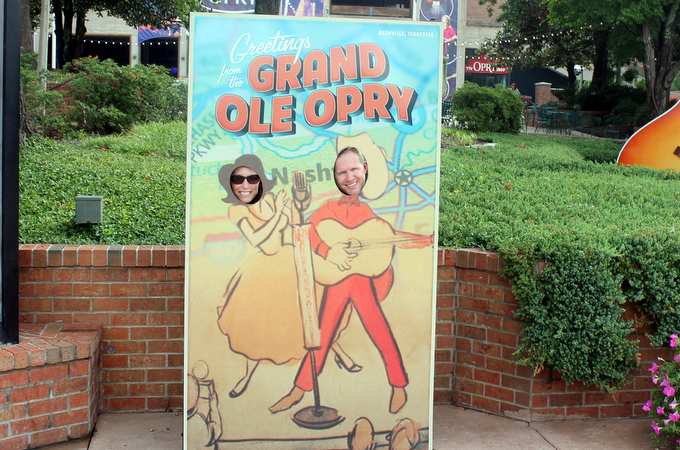 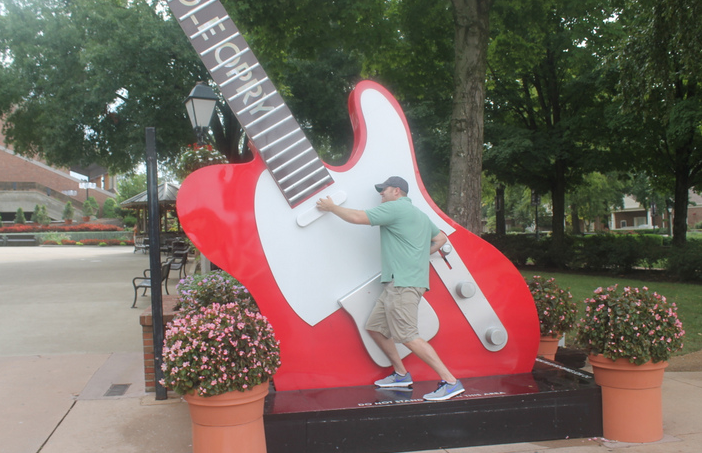 The next day, we had tickets to the General Jackson Showboat cruise down the Cumberland River. You have a brunch with a show tune performance where they sing lots of good country covers and gospel songs. Jacob had a blast! He was so intrigued by the people, the music, the boat — he was jumping up and down, dancing and smiling like crazy. He was a big hit! 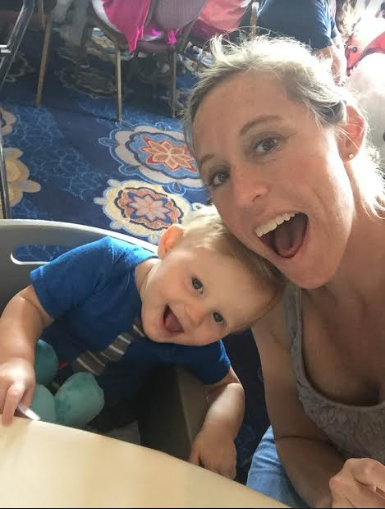 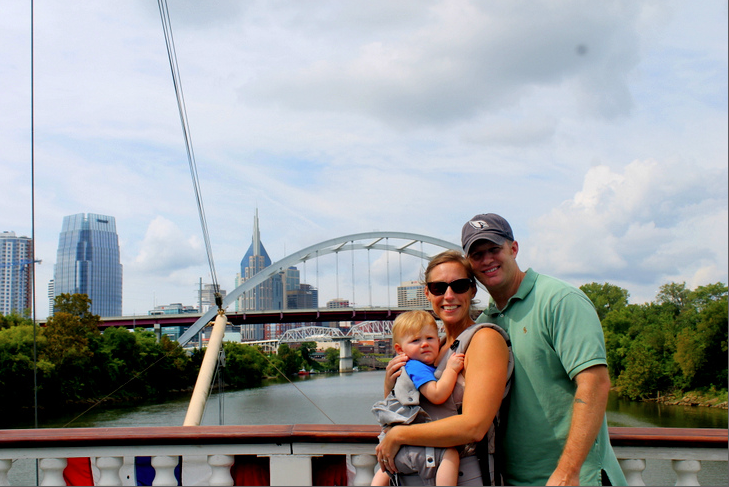 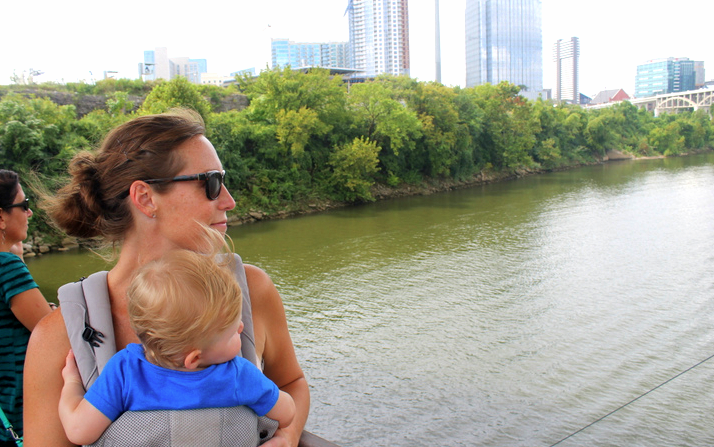 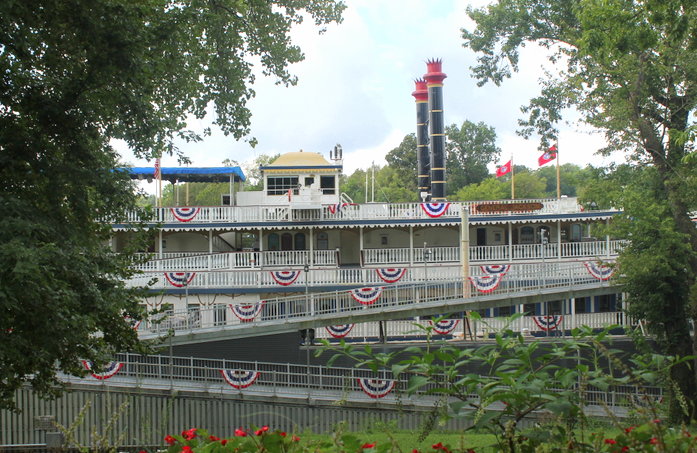 Even though we were all exhausted, we decided to head to downtown Nashville after that. I slept terribly every night of the trip for no reason. Jacob slept all night and gave us no issues but I just couldn’t sleep. Anyway, I rallied and down we went to Broadway Street.

At first I thought we couldn’t take babies in anywhere because it was all bars. I got kind of like really sad because all the live music was inside the bars. I know it’s dumb that I didn’t think of that before but I just thought some would be outside or in restaurants too. Well, luckily, we asked and it turns out plenty of places allow under-21 in before 6pm. Thank goodness! 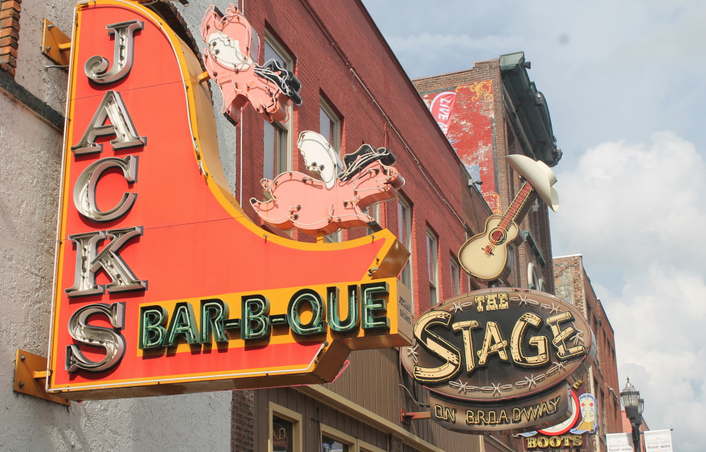 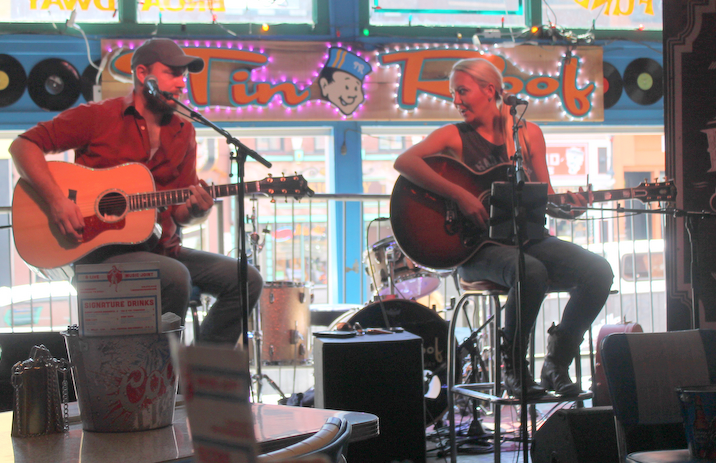 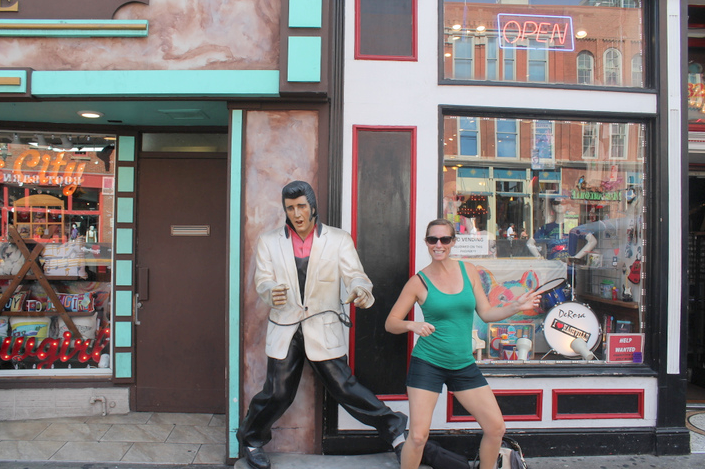 So we enjoyed some live music, a couple of beers and that awesome, sweet end of summer feel. It was actually like 90 degrees!

Love that the bands always play your favorite covers. I requested some George Strait and Blue Honey miraculously played one of my all-time favorites — “Run.” Thank you guys! Jacob was also loving them but he was a feisty little guy trying to climb all over everything so we couldn’t stay too long!

The next day we hit up the Ryman Auditorium and the Country Music Hall of Fame, which was surprisingly more expensive that I expected ($25/person.) It was still cool to see some of the neat stuff they had there. Way too many things to put here but stuff like Elvis’ Cadillac, Johnny Cash’s black suit, other iconic clothes worn by the big names, original papers with lyrics to famous songs (like Taylor Swift’s “Tim McGraw) and they played classic TV hits as well. There was a great clip of Merle Haggard and Johnny Cash on “Hee Haw” as well as the moment Carrie Underwood wore “American Idol.” 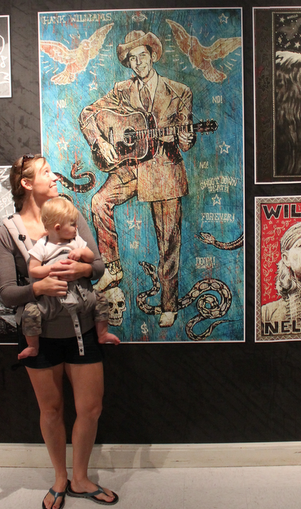 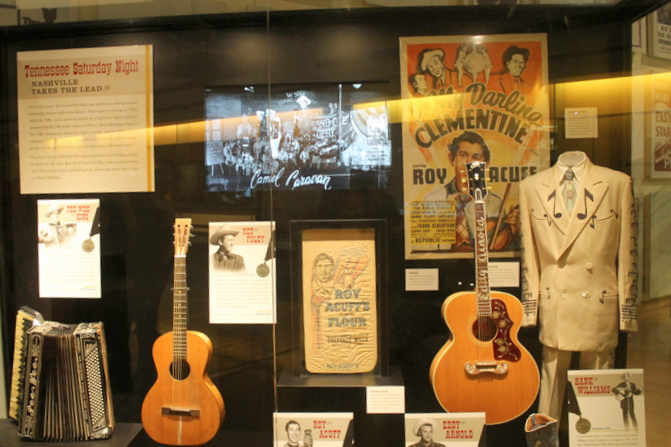 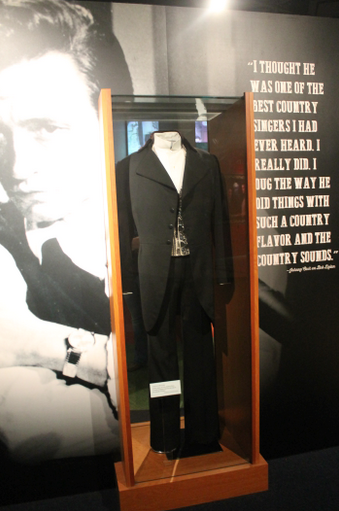 We spent a lot of time walking around the hotel as well, to and from the Opry and the Mall several times too. It’s all within walking distance (not downtown), which is nice. While I had several restaurants I wanted to check out, it was all the energy we could muster to do all that we did.

It is exhausting doing stuff like this with an energetic 10-month-old! We transferred him regularly from stroller to baby carrier and back. I totally love carrying him despite being 21 pounds because I know it won’t be much longer that I can 🙁 But he definitely needed constant entertainment. Despite not working out once this trip, I certainly burned a lot of baby-playing calories!

The one downside was that Jacob goes to bed so early that we couldn’t really do much after that. Aside from night #1 when I went to the Opry, it was “lights out” at 7 over here and I was stuck playing in the dark on my computer since he was sleeping right next to us in the Pack n’ Play. I’m not sure what other solution there is to this problem.

Of course that is just par for the course traveling with a little one. All in all, it was a great trip and I’m so glad we went. I love making family memories already! Also, Jacob was charming everyone wherever we went. I know I’m always a sucker for a baby smile so it was fun to be the Mom once in that situation. He is very expressive and rewards people with smiles quite easily 🙂

As I type, we are leaving tomorrow morning for home. I just had these three hours after “bedtime” and decided I might as well give you all a fun recap. Until next time — yee haw! 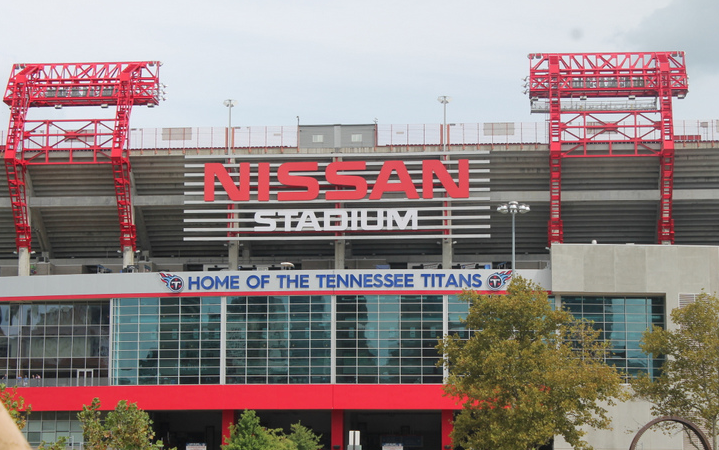