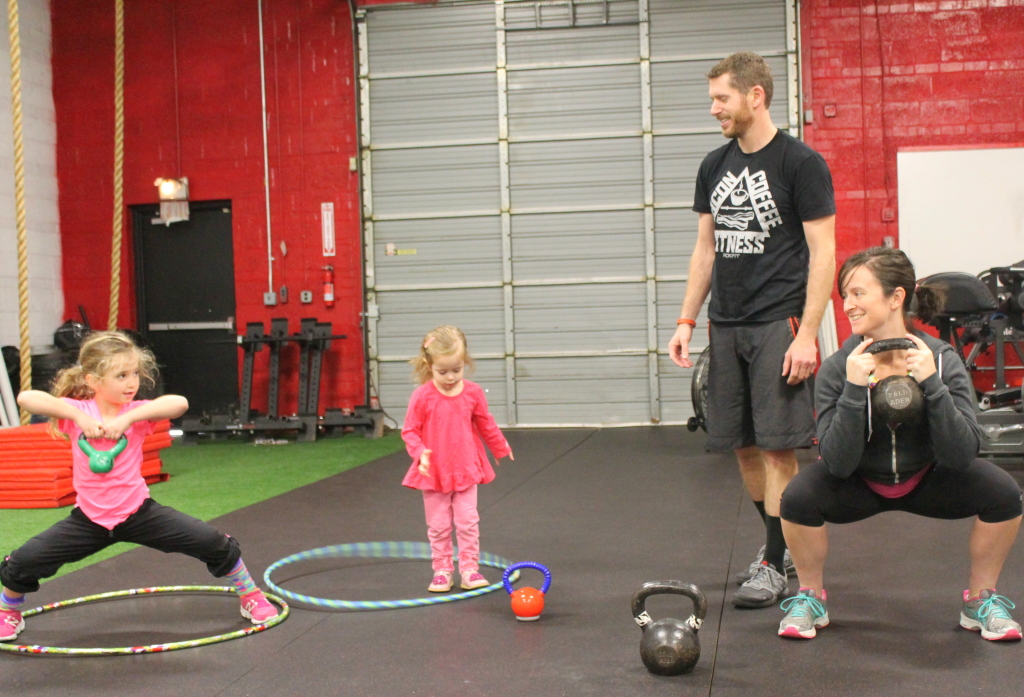 The family that CrossFits together….that’s the theme of this month’s feature spotlight for Trident CrossFit (cutest one yet!). I’ve seen Ben and Liz Klein WOD-ing it out at Trident since I started. What I didn’t know until recently was that they had two adorable little girls that also get in on the action. With the mini-version of CrossFit offered on Saturdays — CrossFit Kids — 6-year-old Nora and 3-year-old Elsie have fun moving in constantly varied, functional ways.

Of course, Elsie is still little too young for the official class but she can’t wait until the time comes. Until then, she’s watching from the sidelines with her Mom or Dad and mimicking movements as best she can. 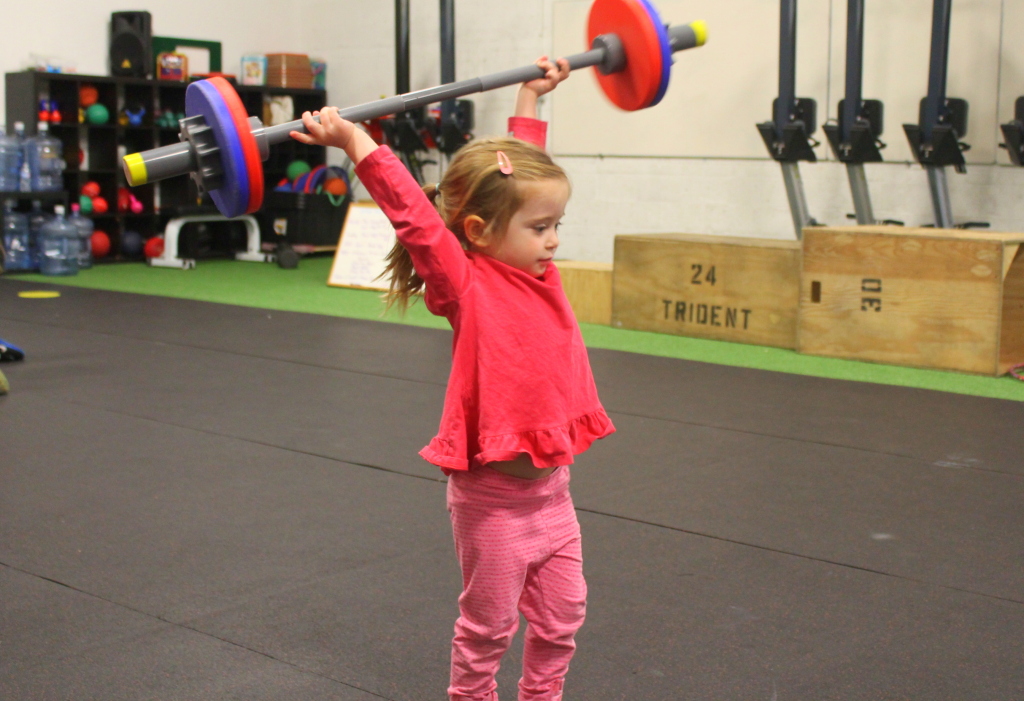 It’s pretty awesome — and convenient for them! — that the family has all fallen in love with CrossFit. Like many, they didn’t expect  to  be such die-hards but four years after their first day at Trident, the Kleins are still going strong every week at the 5:15am and 6:45am classes (they switch off because…ya know…kids :)!)
1.How long have you been doing CrossFit?
We started when Trident opened in 2010.

2. What drew you to start doing it?
Ben was in a running group with Mike Porterfield, and the Porterfields are very convincing people.  Mike talked Ben’s ear off one day about this new place opening – we were between gym memberships at the time, had one small toddler and 2 full time jobs to schedule around, and the class schedule was perfect for us.  I don’t think either one of us knew much about CrossFit, but were happy to check Trident out – or maybe Ben was happy, I was mildly terrified.  After doing the baseline, Ben was hooked.  I think I remained mildly terrified, but just kept showing up!

3. Why did you want to get your kids involved?
I think it’s really important for kids – especially girls – to have positive exercise experiences where they can have fun and be silly.  I liked the non-competitive atmosphere of the kids class, and I like that there’s flexibility in scheduling – we can drop in when our schedule is free, which makes it low stress for us and the kids.  It’s a fun way for our family to spendSaturday mornings together. 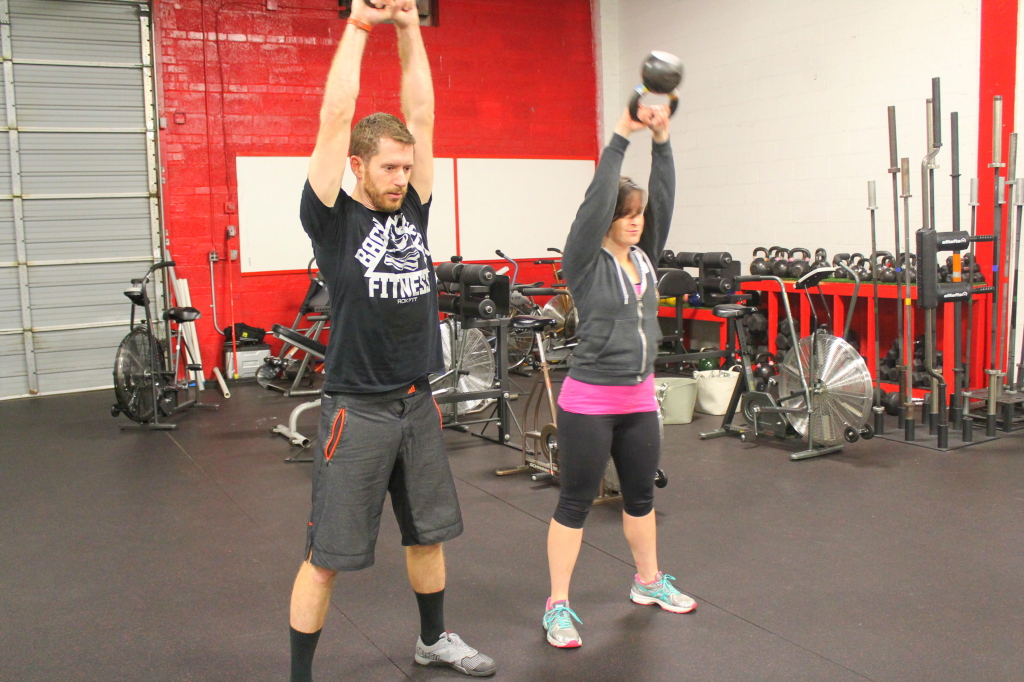 4. Have either of you been athletes in the past? If so, what’s the background there?
Liz: I played soccer (badly) in high school as well as tennis.  I also taught aerobics in college – both a basics class and a water aerobics class to people in physical therapy.
Ben: I ran track and played soccer growing up.

5. What has made you stay consistently doing CrossFit for so long now?
Liz: We both dig the format of the classes where you work out with a group but also get personal coaching.  The ‘constantly varied’ format also keeps us coming back, I think – it’s hard to get bored.
Ben: Before joining CrossFit, I ran 3-5 times a week. It was getting boring.  Now I’ve cut back to running 1 day a week, and I am as fast as I have ever been.

6. Have you ever dealt with any injuries during your time? If so, how did you overcome?
Liz: Between the two of us, we’ve only had relatively minor exercise-related injuries (let’s go knock on some wood).  Right now, I’ve got a ‘thing’ going on with my arm.  I’m visiting Dr. Matt, our resident chiropratic physician, about it (check him out at potomacsportschiro.com), and trying to be smart about not overdoing overhead lifts.

I used to have pretty chronic back pain, and I think CrossFit has helped minimize that.

The worst injury since starting was Ben breaking his ankle, which had nothing to do with CrossFit (slippery deck stairs and walking a dog don’t mix), but he was able to get right back to working out thanks to the great coaches who are always willing to do modifications for anyone.

7. What are your favorite WODs or lifts/exercises?
Liz: The sledgehammer strike is the most wonderful exercise ever invented – who knew slamming a tire could provide so much stress relief!  My favorite WOD is Murph.  I have to scale the pullups, and about half way in, I always want to curl up in a ball, but there’s something about doing that WOD with all our people and all the gyms across the world that is really kind of awesome.
Ben: For me, I like the longer WODs – 31 heroes would be my favorite.  Partner/team WODs on the weekend are also fun.

8. What are your least favorite?
Liz: Bulgarian split squats are evil.
Ben: Probably overhead squats.  Four years in, and it is still a humbling experience. 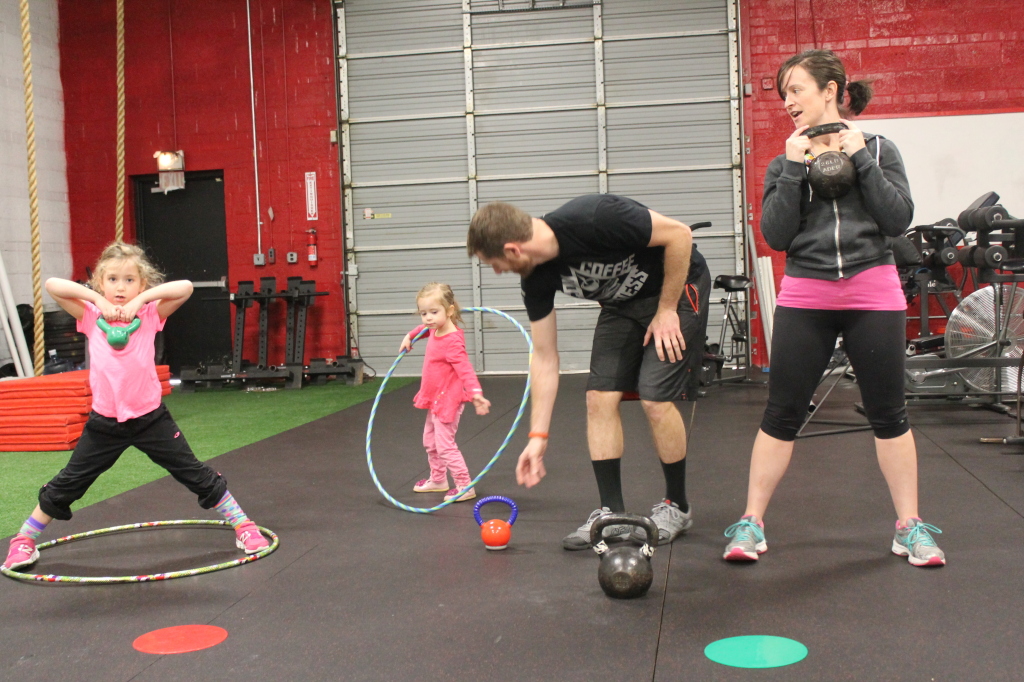 9. What have you seen your kids get out of it?
Nora (age 6) has been going since they started the kids program 2 years ago, and she loves it.  Since she started, we’ve seen her take more of an interest in sports and exercising.  She now routinely asks for the ‘sally up/sally down’ song, and she loves to have her soccer team do burpees, pushups and squats in the warmup – not sure everyone on the team is a big fan!

She told us recently that when she grows up, she’s going to be a ski instructor during the winter and compete in the CrossFit Games in the summer.

Elsie (age 3) is desperate to join the big kids – she can often be seen during the kids class attempting to jump in, stealing the mini trampoline, and swinging from the rings.  She’s technically been going to Trident since before she was born, since I worked out during every long month of my pregnancy with her, but we’ll get her signed up just as soon as she’s old enough.

10. How have you seen CrossFit kids differ from CrossFit for adults?
CF kids are much more excited about cartwheels than CF adults.  And they get to do obstacle courses!

11. Why do you think people who do CF love it so much? Why do you love it so much?
Liz: It’s hard to name just one thing.  Probably a combination of the sense of accomplishment you get after completing a workout and the fact that you get to do it with great people cheering you on.
Ben: It’s also a great form of stress relief, and knowing that you can tackle a WOD at 5:15 am makes anything else in the day a little easier (after coffee of course). 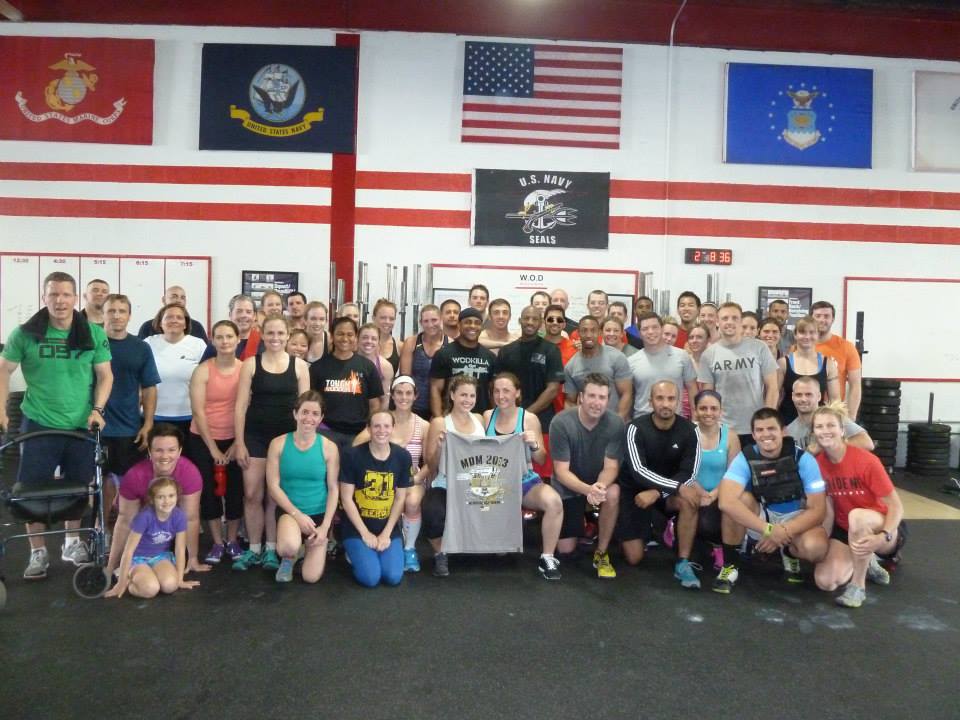 12. What do you enjoy about attending Trident?
The entire program and philosophy that Chriss and Andrea have developed is awesome.  We’ve both visited other boxes around the country, and while some get close, really none compares to the quality of the operation at Trident.  You can tell there’s high expectations for the coaching staff and low tolerance for stupid.

13. Do you follow any particular diet to pair with your CrossFit lifestyle?
Ben follows a mostly Paleo diet, I don’t.  I’ve been a vegetarian since about the 7th grade, and I (unlike my husband!) have a deep and unabiding hate for bacon (sorry my CF peeps, but ew).  Mostly what we’ve done is try to decrease the amount of processed foods we’re eating and increase the amount of home cooked veggies.
See Ben’s love for bacon here: 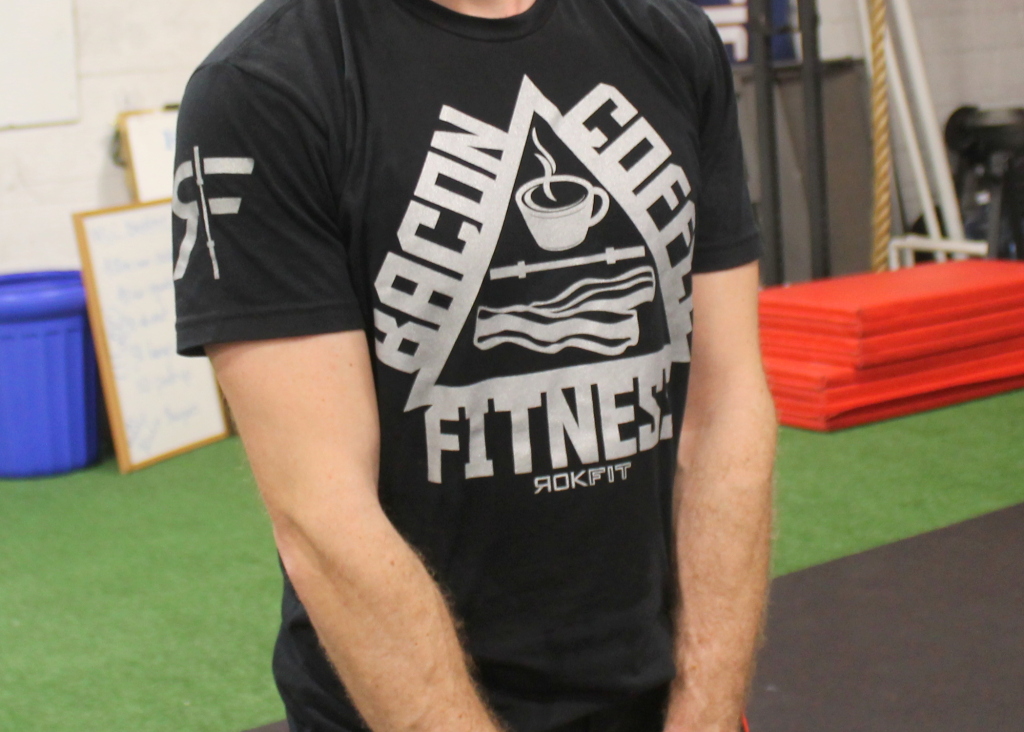 14. Why should people considering CrossFit give it a try?
It’s far less scary than people think it is.  There’s a modification and a scale for everyone.

15. What is one CrossFit goal you have conquered that you are proud of?
Liz: I still remember the first time I jumped on a box, got my toes to actually hit the bar in toes-to-bar, first climb to the top of the rope.

I have never considered myself an athlete, so anytime I hit one of the hard movements, I’m excited.

First handstand was fun – Coach Larry Mike Keyser just kept yelling at me to kick my feet up, and once I stopped over-thinking it, my feet went up.
Ben: For me, it’s scaling the wall out back, climbing the rope, and doing 30 inch box jumps.  Still working on the muscle ups. 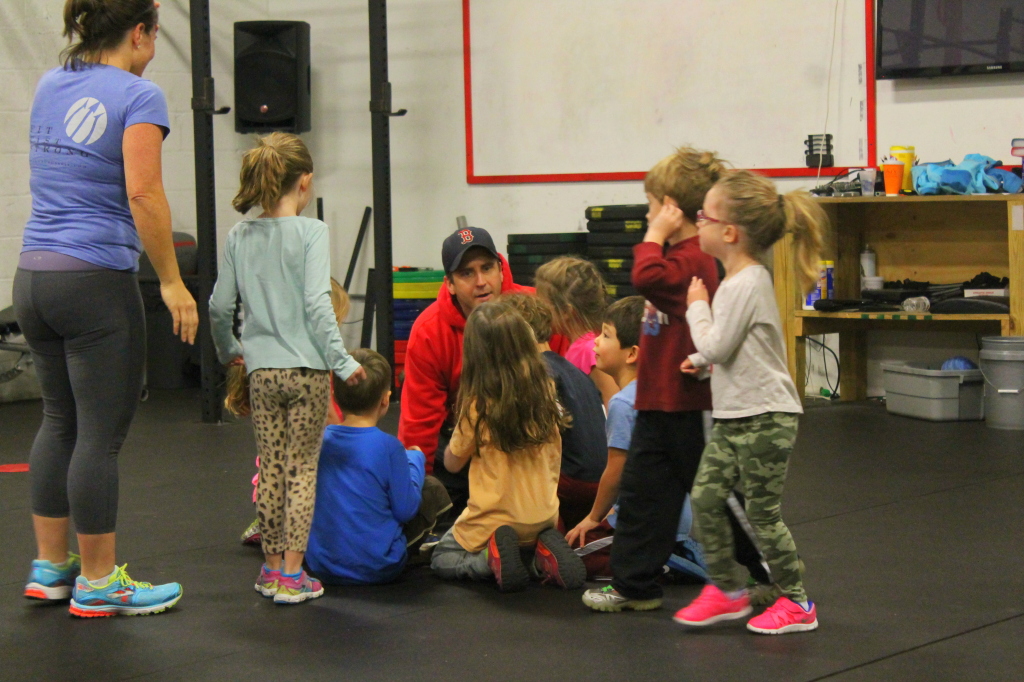 1. What is your favorite part of CrossFit?
Nora: When we climb up and jump off the biggest boxes.
Elsie: I like jumping on the trampo-weeny!

2. Why do you like going to class?
Nora: Because it’s awesome and I get to see friends and play with them.

3. What makes you feel the most strong when you are at class?
Nora: Doing jumping jacks.  Actually, all of the exercises.

4. What do you want to be able to do the most?
Nora: I want to be better and faster at running sprints. 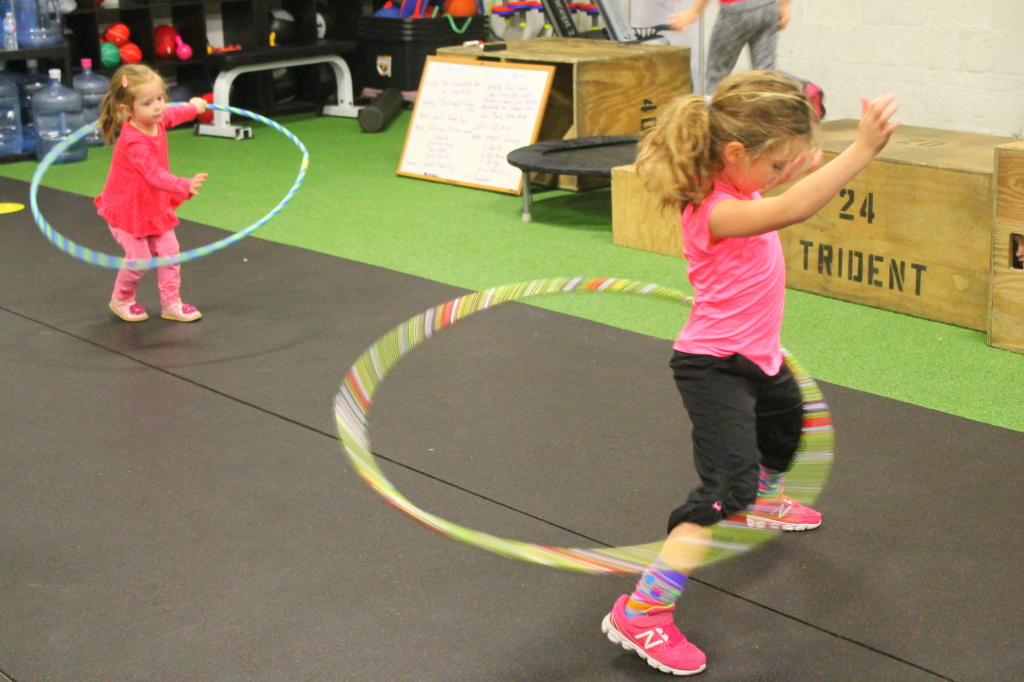 Hope you enjoyed this month’s profile feature! Here are past Trident profiles if you want to check them out:

Interested in classes? Try your first one out FREE at Trident. Don’t worry — you’ll get hooked just like the rest of us 🙂

Does your family work out together? Is it hard to find exercises that work for everyone?