Charlotte Pence has an attitude few can match. She’s kind, gracious and welcomes the criticism her family has dealt with serving in public life. She’s managed to find a beautiful balance between her personal life as a screenwriter and author and playing the role of Second Daughter, the middle child of Vice-President Mike Pence.

In her first non-fiction book, “Where You Go: Life Lessons From My Father,” Charlotte reveals her life story and a peek behind the scenes into the Pence family. She talks with me about her Dad’s encouragement to pursue her dreams and his ability to put his family first despite everything his job comes with.

“He will answer the phone if one of us is calling him, no matter what meeting he’s in or whoever he is with,” said Charlotte.

It was refreshing to hear about the way a family that is so public stays healthy mentally. The Vice-President previously served as governor of Indiana and was a Congressman for many years as well, so Charlotte has grown up in the spotlight a bit, but it’s clear her father has always ensured their family was never sacrificed for his political career.

I was curious how she handled some fo the criticism thrown at her Dad — and how he manages to remain so even-keeled, never uttering an upset word.

“Watching my dad treat others with kindness and grace even when they aren’t treating him that way has been really influential to me,” she said.

In this interview, we also talk about Charlotte’s unexpected conversation with Hillary Clinton on Inauguration Day 2017, the kind words Michelle Obama imparted to her — and what it was like visiting some of the most rural areas of the campaign trail throughout 2016.

On 2016: “There was a level of enthusiasm for that ticket that I’ve never seen in public life. We went to more rural areas of America and would see people lining up, waiting for us, making signs, people were excited about someone who wasn’t from Washington, DC . People just wanted something different. I’m not a political mind but from the people I met and saw, most were people who had never been involved in politics before. One lady said her father had never voted in an election, but he was going to vote for Donald Trump…[but] he passed away before the election, so their family came out to vote for him.”

On meeting President Trump: “He was very gracious and kind…he made time in his schedule to meet with me and have breakfast with my parents and I and get to know us. It was important to us, me being the only sibling available to be there to kind of give my opinion and my advice about it. I was able to meeting the siblings eventually and spent a lot of time with them on the campaign trail. It was cool to see their family interact in such a kind and meaningful way. They are ver supportive of each other and since we are so supportive of each other, it was cool to see.”

On meeting Hillary Clinton: “It was cool to see her, right on Inauguration Day….it was probably a weird day for her and she was there and she was really kind. She took time to talk to us and talk to us about what we were doing, talking about school and what I studied. It was very meaningful to me to see that…at the end of the day people are just people and she definitely understands what its like to have a kid in politics and raise a family [that way]. It was very interesting for me — and also fun to see people coming together, and not just being partisan.”

Saw this, loved it, way to be Saucony!Hey there, … END_OF_DOCUMENT_TOKEN_TO_BE_REPLACED

I've got marathon fever and I don't think I want … END_OF_DOCUMENT_TOKEN_TO_BE_REPLACED 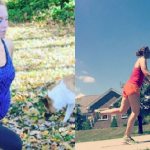 Before I Had a Clue Before I had a baby, I had … END_OF_DOCUMENT_TOKEN_TO_BE_REPLACED

"Religion that God our Father accepts as pure and … END_OF_DOCUMENT_TOKEN_TO_BE_REPLACED

So I'd heard of this blog, "Ben Does Life" a few … END_OF_DOCUMENT_TOKEN_TO_BE_REPLACED

This weekend I went to Atlantic City, New Jersey … END_OF_DOCUMENT_TOKEN_TO_BE_REPLACED

I feel about 99% recovered from the eating … END_OF_DOCUMENT_TOKEN_TO_BE_REPLACED

I almost can't believe that on Friday morning I'm … END_OF_DOCUMENT_TOKEN_TO_BE_REPLACED

Friday I got the opportunity to spend the day at … END_OF_DOCUMENT_TOKEN_TO_BE_REPLACED