The Old Testament is a bear — a ton of dense material to get through, paragraphs that make it tough to focus long enough to ingest. There are long lines of geneology, weird visions, unfamiliar rituals, evil kings, murder and total destruction.

There’s also our favorite Sunday School stories: Adam and Eve, Noah’s Ark, Jonah and the Whale. But I knew I needed to really get beyond the felt board and dig into every word God gave us. The red letters are certainly my favorite, but I knew that every word of the Bible was holy and it was only hurting myself to bite off the convenient bits and pieces.

Read the Old Testament: A Plan to Get Me There

Thanks to Tara Leigh Cobble, a Bible teacher and afficianado, I finally made it through. Her Bible Recap plan on the Bible App and the Bible Recap podcast gave me a schedule and a reason to stay committed. I always had a short podcast episode to help process the verses, one that explained things that made no sense or gave context to sections that felt impossible.

God Never Gives Up on Us.
Reading the Old Testament in a shorter period of time, it can feel like reading the same plot to a novel over and over again: God saves His people, they rejoice for a sec, then reject Him again. He loves them so much, He gives them endless chances to return. He gives them clear messages through prophets, who I can only imagine are exasperated by the people they speak to. Hey guys, I got a direct message from God (“the Lord of Heaven’s Armies,” as He’s often referred, so that sounds pretty powerful) and ya’ll aren’t really taking me seriously.

Regardless, He loves us unconditionally. There is literally nothing we can do to stop His love or end our chances here on Earth to return to Him. I think of my children and know that they could reject me for a lifetime and I could never love them less. That’s what I saw in God throughout the Old Testament.

Fear of God is Right and Good.
I’m not sure I fully understood the “fear of God” until this year. It can be a strange concept, as we generally think of God as loving and forgiving. But the Old Testament puts God’s wrath on full display. He is all-powerful, both in performing miracles and holding life and death in His hands.

It can be uncomfortable to witness God’s power used in ways that scare us. But it reminded me that He is God and we ought believe in His grace, but recognize His omnipotence as well.

There are moments in the OT where women and children are killed, or God doesn’t save humanity from death, when it seems unfair and unloving. I don’t think we should make decisions out of fear, but maintain a healthy respect for who God is and have that context frame how we think about our relationship with Him.

Jesus is the Point of the Old Testament.
Lots of people spend the majority of their time in the New Testament. If Jesus is our main dude, why don’t we just focus on Him? I hate to break it to you, but you are missing out on a whole lot of Jesus if you skimp on the OT. Throughout every book, we see prophecies and signs pointing to Jesus. It’s impossible to read it in hindsight of the NT and not see it. Constant referrals to a coming Savior that would have sounded mysterious when written, but make total sense now.

Knowing that these books were written long before Jesus ever arrived, it’s difficult to deny the truth of how everything they say actually then occurred. There’s details about the life, death and Resurrection sprinkled throughout and you want to jump through the pages to the characters to let them know — his name is JESUS and he’s coming!

God Gives Us What We Need When We Need It.
God asks people throughout the Bible to do some pretty crazy scary stuff. Approach the King, who has the power to murder you on the spot, and tell him what I said, he directs multiple people at various times in the OT. Go fight a giant 10x your size. Lead your very small Army into battle against one far bigger than you. Walk through an sea. Trust me when I say don’t follow the King’s orders, even when death is imminent if you don’t. Those are just the few examples that pop to mind right now, but there are many more.

The stories of people like Moses and David remind us that it took so much faith to obey God and they didn’t have what it took until the moment arrived. They obeyed and God showed up as promised. It will never feel like you can do it until the moment you do — and if God tells you to move — He will never leave you hanging.

God’s Favorite People Are Struggling.
The Old Testament is awesome in it’s constant reference to loving and seeking justice for the poor, the widow, the orphan and the foreigner. These are God’s favorite people, or so it seemed to me. The outcast and downcast, the struggling and seeking.

The OT continuously directs God’s people to care for, love on, seek justice for, provide for these four categories of people. I thought about foster kids and immigrants and single moms and those barely making a living to provide for their families. It reminded me that our job is to love. Yes, policy. Yes, laws. Yes, details at some point. But mostly, love. And if that’s not our very first concern, the details don’t matter in our mission as Christians.

God Loves to Use Unexpected People.
The rich and powerful? Not impressive to God. But how about these folks? Old women to bear important people in His story. People with a stutter to deliver earth-shattering messages. Really small people to do huge things. Prostitutes to make a point about what actually matters in life (re: sexual sin doesn’t prevent God from working…). Cowardly people to do courageous things. Sinful (re: murderers, for example) people to play the biggest roles in the most important story of all time. Drunkards and jealous and scared people to live out His mission for the world.

We are all called. He can work through any person at any time for any reason. None of us are worthy, but all of us are capable through His mercy and power.

Those are just a few of the takeaways I have from reading the Old Testament for the past 9 months. There were plenty of days when I slogged through a reading and didn’t digest a word well, but I kept showing up. In doing so, I feel like I really met God in a new way. I understand His better and got a deeper look at just how He views us, His greatest and most beloved creation.

It was also a reminder of the brevity of this life. A brain crash to remember we’re here and gone, but He’s always been. Yes, the Beginning and the End. But the whole point is — there is no End. There is beautiful, eternal life with the One who loves us most.

Even though the thought of eternity scares me, and if I start thinking about it too deeply, I start having a panic attack, it’s reassuring to let it sit there in mind when things get hard, when the world is so heartbreaking I can’t bear it. There is something better — an anecdote to every injustice and tragedy. And that is what the Old Testament is all about.

*This post is sponsored by Fitfluential, LLC on … END_OF_DOCUMENT_TOKEN_TO_BE_REPLACED

These photos were taken by last year's NCC team to … END_OF_DOCUMENT_TOKEN_TO_BE_REPLACED 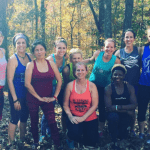 I spent the weekend before the election in an … END_OF_DOCUMENT_TOKEN_TO_BE_REPLACED

Does life really get any better than that? And who … END_OF_DOCUMENT_TOKEN_TO_BE_REPLACED 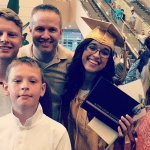 Last weekend was all about family -- and I'm not … END_OF_DOCUMENT_TOKEN_TO_BE_REPLACED