Hey everyone — meet my daughter, Abigail Grace Sylvester! She arrived by induction two days before her due date on March 7, 2018 and we are so happy she finally made an appearance! She is six days old today and I wanted to share her birth story on the blog before it gets away from me. I know I don’t blog that much anymore but I’d still like to share 🙂

Since Jacob was born 15 days early, I anticipated an early arrival for Abby. But when we passed that date and things were still holding strong, I was glad. I actually knew I would miss being pregnant and that I will probably never be pregnant again so…I kind of cherished the extra days. Still, about two weeks before due date, my doctor told me I had low fluid and would probably need to be induced within days. However, when I came back two days later, the fluid was somehow back up really high so we continued to wait.

My doctor said new research has shown that women 35 and over should be induced before or on their due dates. Some big study showed lower rate of stillbirths. Now, I didn’t want to hear THAT word at 39 weeks pregnant but was happy to quickly schedule an induction upon hearing it. So we settled on two days before the due date with the hope that maybe she’d come on her own before that. Last belly pic: 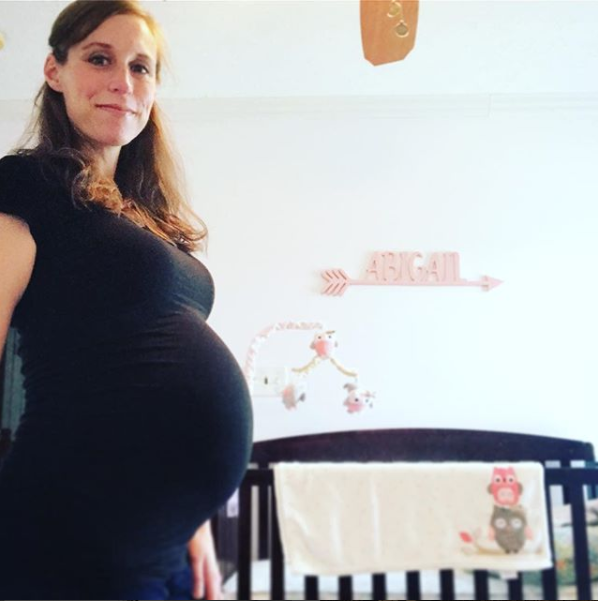 She didn’t though and I woke up bright and early Wednesday morning to shower, eat breakfast and start this crazy day. It is weird have a scheduled birth (Jacob’s was kind of “fun” because it was so unexpected) but this was nice because I got a full night of sleep and plenty of time to prepare in all ways. We dropped Jacob off at daycare early and headed to the hospital. It was a little surreal!

Originally, I thought inductions could take forever — like up to 24 hours even but my doctor quickly assured me that this baby would probably be born by 5pm — or even 3pm. Wow, that seemed so fast! Before the birth:

We checked in, signed paperwork and I changed into the hospital garments. Then, they broke my water like it was no big deal and we were moving forward. I told them immediately that I had no interest in painful contractions and please order up the epidural whenever. I had a big fear of missing it somehow! With Jacob, I had wanted to feel contractions and I went pretty long without the epidural to the point I was almost in tears by the time I got it. This time, I had pretty bad cramping but it wasn’t unbearable. After just a couple of hours, I got the epidural and my lower body floated off to numb land.

I had come into the hospital at 3cm dilated but it didn’t take long — with Pitocin — for things to move ahead. Rick and I just hung out in the room alone for a couple of hours…as the medicine made me tired and I kind of dozed off a little bit. I was feeling super relaxed and chill (yep, that’s epidural labor for ya) when around noon, just four hours after I was induced, they said I’d probably be pushing in an hour or so. WHAT? I was shocked, I had no idea and felt like it was all happening too fast. I just wasn’t ready!

That being said, baby didn’t care…and about 1pm, they began to prepare me for delivery. I couldn’t feel a thing so it was totally surreal. Of course, you have to be able to push and then we got to the point where it was time. When a contraction hit, they had be push was hard as I could for a count to 10, three times in a row. I was really getting out of breath and recognized that it DOES help to be in good shape for this experience 🙂

I had no idea how long pushing would take. With Jacob, it was like 20 minutes but with Abby, I only pushed for about 10 minutes total. We cycled through the counts to 10 three times each maybe 5 times or so. Rick was right next to me, breathing with me…kind of cute 🙂 — and I heard them saying “I can see the head” and I was just in shock! Before she was out, the doctor said she had to use a vacuum to get her out completely because she was stuck behind my pelvic bone, but no one seemed panicked so I didn’t.

I wasn’t sure that the last push would be the last push but the next thing I knew…there she was out and right on my chest crying!

Because it all happened to fast, it didn’t even feel like real life. But that glorious sense of love and miracles overcame me as I held onto her for the first time…thinking, how did this tiny human just come out of my body? It’s SO INSANE every time you really think about it.

Soon after, the doctor told me my placenta was sticking to my uterus so she had to go in there somehow and dislodge it. I have no idea that was done but hoped it was nothing too serious. Basically, I think it just meant they had to watch my bleeding more carefully afterward and that I have had more bleeding since the birth than I would have normally.

It was strange to see my stomach just flattened out (not flat but …not pregnant) right after…after all this time. I know some people’s stomachs stay pretty distended after giving birth but mine went down pretty fast reminding me I feel like I have been pregnant forever!

We got her weight and length and then back into our arms, as we just stared at her big eyes…wondering who she really looks like! She had dark hair, unlike her brother and looked more like a newborn than either of us. Jacob looked like Rick from moment one so we are still kind of curious to see how she develops! Some people have said they see me already but I’m not sure yet.

I think I forgot they sleep most hours of the day (except the ones you want them to of course ;)! We will be discharged from the hospital at 2pm today. Ready to head home and take on the “real world.” Now, who wants to recommend some shows to binge watch? Abby and I are just finishing up “Call the Midwife,” my pregnancy binge (perfect, right?) Thanks to all for all the love & congrats! ??

I am so incredibly grateful to be the mom of 2 — I can’t believe I was blessed with this miraculous journey TWICE. I totally get how people end up wanting three or even four or more — though I don’t think we’ll be doing that at this point 🙂 I’ve been full of post-partum highs the past week and though I’m trying to be mindful of my mental state — knowing these feelings could dip or change easily — I am thankful for the positive vibes. There is NOTHING like the chemical magic high of laying with your baby on your chest just breathing. It’s incredible.

As you can see in this photo, I have chosen not to breastfeed. That is another post for another day. I’m still trying to collect my thoughts about this decisions, which was big and personal, but I do plan on sharing more about it in the near future.

After spending two days at the hospital, we were headed home — and I was ready. I hadn’t left the hospital room since arriving and staying cooped up is not my style, even after giving birth 🙂 I was ready to get home and get settled with baby — plus introduce her to her big brother!

We’ve been talking about “Baby Abby” for so long, I think Jacob thought she was fake but man, it was so adorable when he finally did see her! I have to share this sweet video with you and I know it will be one I cherish forever! Enjoy:

I have plenty more to say but will leave it there! Thanks for the love 🙂

« Crib to Toddler Bed Transition: Tips for Success
Leaving Cloud 9: The Trailer and Reason Behind Why We Wrote It » 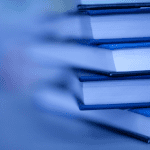 *You can find a longer, growing list of reviews … END_OF_DOCUMENT_TOKEN_TO_BE_REPLACED

I know a lot of healthy living foodie bloggers … END_OF_DOCUMENT_TOKEN_TO_BE_REPLACED

This weekend I went to Atlantic City, New Jersey … END_OF_DOCUMENT_TOKEN_TO_BE_REPLACED

*Teensy pet peeve: I shelled out $85 for all of my … END_OF_DOCUMENT_TOKEN_TO_BE_REPLACED

I've tried it. Hello everyone! You know I … END_OF_DOCUMENT_TOKEN_TO_BE_REPLACED

So my sister's having a baby, right? It's baby #2 … END_OF_DOCUMENT_TOKEN_TO_BE_REPLACED

I made food! I know, it' doesn't happen often … END_OF_DOCUMENT_TOKEN_TO_BE_REPLACED

When I saw these, I knew I had to make them! I … END_OF_DOCUMENT_TOKEN_TO_BE_REPLACED