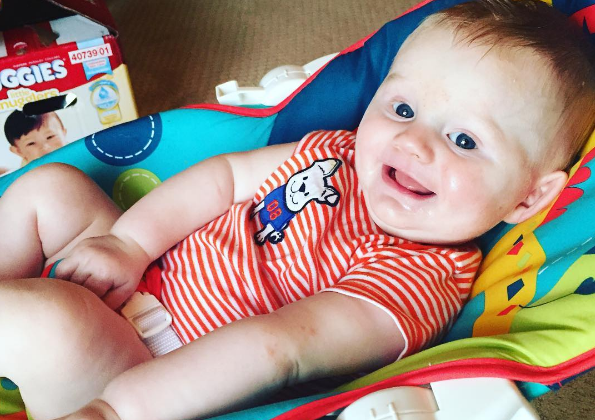 Daycare. I never wanted to do it. But now, I’ve done it. I lasted as long as I could with limited childcare in the form of a very part-time babysitter but apparently, 5 months was my limit! I’ve been working full-time since Jacob was 6 weeks old, so it’s been…a ride.

We chose KinderCare, just 2 miles from our house and a facility with a great reputation. I got a great feeling from speaking with the director, who has been there for 15 years. She was exactly the kind of person I’d want looking after my baby.

I’ve got him in three days a week — Monday, Tuesday and Thursdays — and babysitter is still coming over here on Wednesdays. Fridays are dependent on the rest of the week.

I was really sad to take him the first day. He is SO smiley and cute and wonderful in the morning (well, most of the time!), I believe I could just stare at that little face all day. But, I have a job so I had to do it.

I didn’t expect to cry — I really didn’t! But as I was preparing to leave, I just started crying like crazy. It was just the overwhelm of leaving him with someone he doesn’t know — and then thinking about how I’m missing moments of babyhood I will never get back.

But honestly, even if I was a SAHM, there would be times I need to get away and do some things for myself! I know I’d be doing a lot more with my blog and other ventures if I didn’t have my job at NR so it’s silly to think I’d be sitting around staring at him all day. Plus, I wouldn’t be happy if that’s the only thing I had going on. For me, work is hugely fulfilling and enjoyable.

I really do think about Jacob a lot when I’m gone. I have to try to push it out of my mind and focus. Sometimes I’ll get into a project and realize I haven’t thought about him for awhile and feel guilty. His little rosy cheeks are just etched permanently in my mind. He’s not in the attachment phase yet, so he doesn’t cry when I leave or anything but I can’t imagine how hard it’s going to be when that happens 🙁

I intended to only leave him there for about 4 hours, but it’s CRAZY how fast time goes and all of the sudden its’ time and I’m not ready. So far, he’s been there 9-4, which seems FAR too long but I need it to get everything done. And I only wish I could be DONE with work then, but I’m not and always have like more hours of it left to get in throughout the rest of the night. There are pluses and minuses to a non-traditional, WAH job.

I am always ready and not ready to pick him up. You know when you pick them up, all bets are off for the rest of the day. So I’m trying to cram EVERYTHING in before pick up. Of course, I’m always so excited to get in there and see him. He never seems overly glad to see me again — yet — but boy am I glad to get that kid in my arms again.

I have found he doesn’t seem quite as expressive when I pick him. I don’t know why that is…but perhaps he just has to get used to me again after seeing other people most of the day. It kind of makes me sad but I know there are phases.

It makes me sad to see all the babies in there and I don’t know why. Sometimes I feel wrong for doing daycare — like greedy because I know that I could be a SAHM but it would make finances and life so much harder. But I remind myself that no one grows up traumatized because they went to daycare! Kids learn and play and interact — if anything, it’s good for them. Plus working makes me happy and I have such wonderful flexibility that I’m in a much easier situation than most.

I’m not sure what I’m trying to say here. Just that we’re dealing. I hear that you have “mom guilt” no matter WHAT you do in life so I guess I should just accept it now.

One thing is for sure, being a mom is hard in ways I didn’t know existed. It’s not the physical hardness, it’s the emotional hardness of loving someone so much it hurts. How’s this for fear? I prayed this morning that God would make sure I die before Jacob because I could never bear it any other way. I’m sure EVERYONE prays for that, but I figured I might as well throw it out there.

Sometimes I think I don’t want another child because I can’t imagine doing this with an entirely other human being at the same time! I know a mother’s love has no limit — and I really do hope I have another baby someday — but it’s overwhelming to think about.

Now I’m rambling. Gotta get back to work!

« Benefits of Yoga: A Handy List
CrossFit & Running After One Year Off + a Baby »

It's the shoes! Ya'll know I've been thinking a … END_OF_DOCUMENT_TOKEN_TO_BE_REPLACED

I admit it -- I heard of this guy while watching … END_OF_DOCUMENT_TOKEN_TO_BE_REPLACED

*Entry rules at the bottom of this post!I've been … END_OF_DOCUMENT_TOKEN_TO_BE_REPLACED 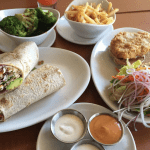 This week, I'm participating in the 2nd Annual … END_OF_DOCUMENT_TOKEN_TO_BE_REPLACED

This weekend I had lunch with two new friends and … END_OF_DOCUMENT_TOKEN_TO_BE_REPLACED 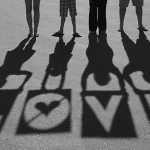 When I was a little girl, I always listened to Amy … END_OF_DOCUMENT_TOKEN_TO_BE_REPLACED

I've been trying really hard lately not to make … END_OF_DOCUMENT_TOKEN_TO_BE_REPLACED