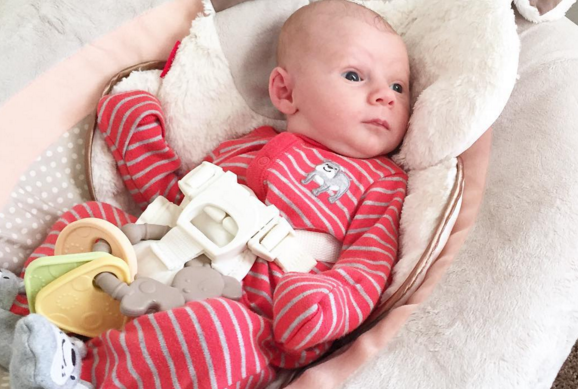 1. Fisher-Price Cradle n’ Swing. I didn’t use this for the first month because Jacob seemed too small for it but now,  use it every single day. He loves watching the mobile, hearing the music and swinging. It’s easy and helpful for a busy mom trying to get things done! Sometimes he falls asleep in it and I turn off the rocking so he can sleep more restfully.

2. Snuza. Like all new parents, we are anxious about our baby when he sleeps. The risk of SIDS is always looming and the fear that we wouldn’t know something was wrong while we were all sleeping is scary. Thankfully, the Snuza to the rescue! It clips to your baby’s diaper and senses breathing movement. If it doesn’t sense movement for 20 seconds, the device vibrates to startle the baby. If the baby still doesn’t breathe, a loud alarm goes off. We have tested it — and it totally works. Very reassuring.

3. Babymoon Head Pillow.  I had never once thought about flat head syndrome — and continued not to think about it — until Jacob was 4 weeks old. Then, we realized he was at risk (as all babies) are since he sleeps on his back and sits in swings, car seats, rockers. So, we began doing tummy time and bought a pillow for his head for supervised sleeping & lying down. We use it all the time and it makes me feel better know his head is elevated and not being flattened.

4. Halo Swaddle Sack. The hospital gave us one of these and we’ve been using it since Day 1. It’s hard to know what to dress babies in for bedtime because you don’t want them too hot or cold, but you also have to avoid much material. Jacob doesn’t like his arms swaddled and the sleep sack (which we also have in a non-swaddle version) allows them to be out. He feels snug and warm but not restrained.

5. Fisher Price Rock n’ Play. At my sister’s suggestion, we began sleeping Jacob in the Rock n’ Play from day 1. It’s snug and safe, plus has a tilt for anyone worried about spit up or reflex. We haven’t had that problem but still liked the Rock n’ Play. We continue to use for naps and nights where he’s having trouble sleeping, however, we mostly use a Graco Dream Suite bassinet (which I received for free, but do really like) for night time now, in anticipation for transition to crib sleeping.

6. White Noise App. I downloaded a standard white noise app on my phone, and it has a million sounds, but the one I use most is the dishwasher sound. Many friends told me a sound machine was essential for sleeping babies and I do find it helps. I have a regular sound machine in my room as well, but the app is nice since I always have my phone on me and can just switch it on. The only problem is you can’t use your phone for anything else while it’s on.

7. Similac Sensitive Formula. After having trouble with breastfeeding and struggling with pumping, I made the switch to all formula a month ago. We were using Enfamil but it seemed to cause stomach issues for Jacob so we switched to Similac Sensitive and have had pretty much no issues since then.

8. Mamma Chia. Okay, this one’s really for Mama but I am really enjoying it! Mamma Chia sent me a gift pack and I ate it up very quickly. We all know that super power food that is the chia seed and Mamma Chia does a great job incorporating them. I’m a weirdo and kind of love the chia seed texture. They have all these yummy, healthy new green chia juices that I felt awesome about drinking. It’s definitely a go-to healthy option for me for mid-morning & afternoon snacking. 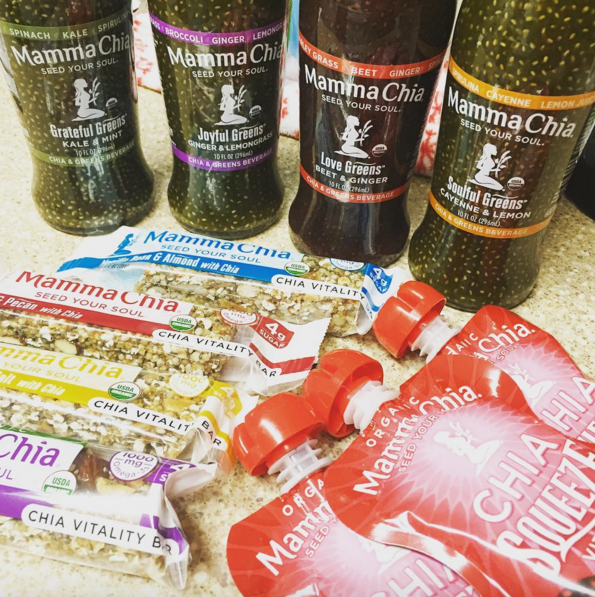 Purity culture. It's affected me in so many ways, … END_OF_DOCUMENT_TOKEN_TO_BE_REPLACED 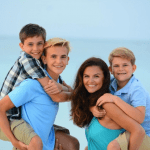 When I saw a recipe for Strawberry Champagne … END_OF_DOCUMENT_TOKEN_TO_BE_REPLACED

Author Jeanette Walls at the event. So book posts … END_OF_DOCUMENT_TOKEN_TO_BE_REPLACED 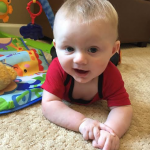 *This post is sponsored by the Baby Cubby So … END_OF_DOCUMENT_TOKEN_TO_BE_REPLACED

I was so excited to get a facial this weekend! My … END_OF_DOCUMENT_TOKEN_TO_BE_REPLACED

Why Muscle Recovery is so Important Most of us … END_OF_DOCUMENT_TOKEN_TO_BE_REPLACED 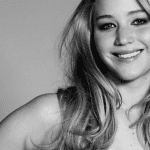 When I saw that Jennifer Lawrence wrote a piece on … END_OF_DOCUMENT_TOKEN_TO_BE_REPLACED