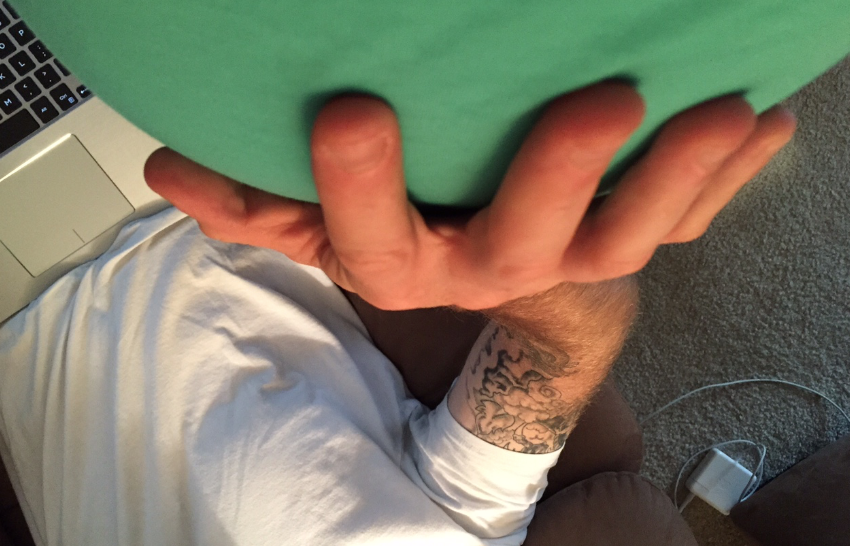 Turns out, getting a good, non-cheesy baby bump photo is kind of hard. But there you have it folks! Today, I am 24 weeks, technically 6 months, which is INSANE! I have been saying all along, I wanted to get to that point of viability so I knew the baby could survive outside the womb if anything happened. A silly way to think but I feel a little relief now that I’ve gotten to that point.

Not to say this whole thing has been quick! 2015 has been the longest year, as I wait each day for pregnancy to develop. 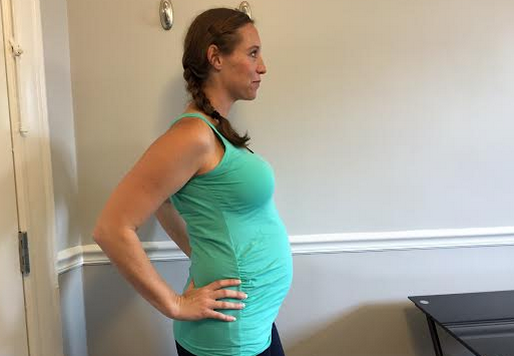 Bump. So the bump is still pretty small. Not sure how it looks to you in the photo but it’s fairly small when I’m wearing a baggy shirt or dress — like people would probably not ask me if I were pregnant for fear of being wrong. But as time goes on, I realize it’s a blessing to not be that big. A girl who was only a week ahead of me in a class last week looked like she was about 8 months!

Nausea. So it took until week 20 for the nausea to totally subside. I thought it was going to be with me until the end by then, but one day I woke up and realized I hadn’t felt nauseous in a couple of days — holy moly! Thank God. That first trimester and a half was just pure misery. And I can’t believe how many people I met that told me that just didn’t have morning sickness. What?!

Appetite. So my appetite is totally not of the ravenous second trimester kind I’ve heard so much about. I was looking forward to having an excuse to eat more but I have felt almost completely normal when it comes to food. No cravings or aversions — how weird am I? The one thing that has changed from the past is I always need to eat some kind of carb (like toast) as soon as I get up. I can’t have coffee without it now. Yes, I drink one cup of coffee per day and have been the whole time (except during pukey days.) I generally eat healthy but try to remind myself it’s okay to have extra or more than normal right now.

Energy. Energy is fairly normal, though mornings still a bit harder than they used to be. I also find I hit a rough spot around 2pm everyday, where I could seriously just take a nap every day. I usually can’t and don’t do that but I have actually done it a couple of times when I was home.

Exercise. As you probably know, I’ve been getting plenty of exercise. I take a class or do something 5 days a week and I love keeping active. My sciatica is still there and isn’t going anywhere apparently so I just ignore it for the most part. I do a small amount of jogging but mostly hit up barre, yoga, spin, walking, light weights. Just trying to keep up my fitness but definitely nothing too intense. 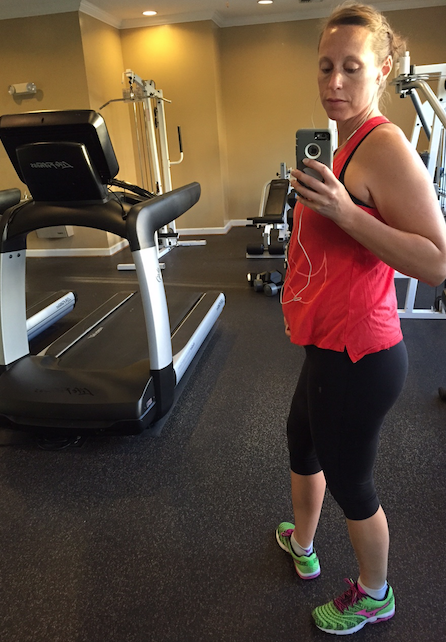 Sleep. I have no issues with sleeping whatsoever, which is a blessing. I usually turn out the lights after reading for 20-30 minutes and fall asleep quickly. I sleep almost exclusively on my left side, per advice from the baby books, though I know it’s not that big of a deal. They say its the best way for the baby to keep the blood and nutrients and all that flowing to it so when I flip to my right I get this horrible vision of everything flowing away from him and turn back to my left side 😉

Kicks. Oh boy, the kicks! On my last update, which was 18 weeks, I still hadn’t felt anything. Times have changed! I started feeling him move around 20 weeks and now it’s a daily occurrance. I can hardly believe it’s really him in there moving around! Sometimes it’s so much I see the the kicks moving my belly around and you can feel them all the time. Rick has gotten to see and feel the movement a lot. I love to feel him kick because it reassures me he is okay and makes me so happy just to feel it!

The Stuff. We still haven’t bought very much stuff, though we have received some gifts of onesies, blankets and a few other things. I think we are waiting to see after the baby showers I’m having plus we have a possibility of moving and don’t want to buy big items that we would just have to move before the baby is born. It’s overwhelming thinking about everything we are supposed to get but I have a feeling basics are most important. We still have time to stock up!

Reading. I’ve been reading “Healthy Sleep Habits, Healthy Child,” as well as a few other pregnancy/labor/newborn books. Everything says basically the same thing and while there’s a ton of info, much of it doesn’t seem like rocket science. I feel like so much has to just be experienced to really “get it” so…we’ll do that! I’ve also loved keeping up with my fellow bloggers & their pregnancies, Brittany, Meghan, Gina, etc.

Classes. I took a “Caring for a Newborn” class and think I will also be taking a breastfeeding course. Rick and I are also going to take one about labor, delivery and first days of life. I was surprised to be the least pregnant of anyone in the first class — people wait till the last minute to get these things in apparently. By the time I head to the next one, I should be more in line with other people in the class.

Name. We have a couple of names that we like though we haven’t made a final decision. Sorry, probably won’t spill the beans till he’s born but a little secret, we’re not into wacky names so it won’t be anything crazy like Spike or Aztec. I always thought picking a kid’s name would be so much fun but it’s actually frustrating and hard! I have several names that I really like that Rick doesn’t like and vice versa. 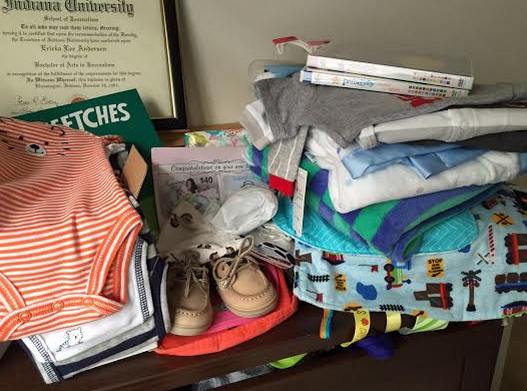 Right now, time feels like it’s finally moving and I know December 2nd (or earlier) will be here before I know it. I’m more excited now than I have been before but I have to tell you, it still feels unreal to believe there is actually a baby inside! We have an ultrasound next week so I’m pumped for that! Then, we will have another 3-D ultrasound around 30 weeks. I am very nervous about what labor will be like — I’ve heard great stories and awful stories. All I know is I’m a wimp when it comes to pain! Yes, I’m getting an epidural but I know that is not the answer to all your problems!

I imagine our baby must be just so tiny right now, weighing at most 1 pound and a half, but he’s so active I can hardly believe he’s so tiny. I am really excited to see the baby but almost more excited to see Rick when he holds him for the first time. He is probably more excited than any Dad has ever been and I can already imagine how beautiful that moment is going to be for me to see. I can already tell you that this is the job Rick was made for.

Not sure when I’ll do another update but maybe sooner rather than later now that things are moving along! Questions for me?

« I Remembered Why Zumba is the Best
A Weekend in August »

I just love this song. It makes me happy. And … END_OF_DOCUMENT_TOKEN_TO_BE_REPLACED

Homemade pizza has seriously become one of my … END_OF_DOCUMENT_TOKEN_TO_BE_REPLACED

*This post is part of a social shopper marketing … END_OF_DOCUMENT_TOKEN_TO_BE_REPLACED

Finding the energy to exercise when you're feeling … END_OF_DOCUMENT_TOKEN_TO_BE_REPLACED 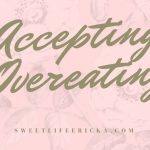 So here's the thing -- I overeat at night. It's … END_OF_DOCUMENT_TOKEN_TO_BE_REPLACED 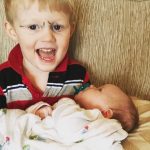 I hate to type it, but my maternity leave is … END_OF_DOCUMENT_TOKEN_TO_BE_REPLACED

I know I haven't been very good at documenting my … END_OF_DOCUMENT_TOKEN_TO_BE_REPLACED 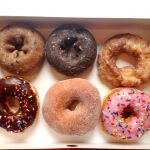