The holidays can be stressful but this year, I had a great time. Despite shuffling between households throughout the week, we managed to remain calm and enjoy ourselves. Our first Christmas was spent with my family. Unfortunately, it was a small group because many people couldn’t make it – including my sister Shelby and her family (including my newborn nephew Gunner) but luckily we were able to Skype with him:

The little head you see poking out there on the left belongs to my nephew Marshall, who was here luckily. He’s a little bundle of nonstop energy and provides plenty of entertainment for us — and chasing around for his parents.

I hate that I don’t get to see him more often but I soak it up when I can. Kids are most definitely one of the best parts of the holiday:

My mom was busy making food and apple pie for the real Christmas Day as we visited on Christmas Eve. My parents have moved multiple times over the years so I don’t ever have a familiar house to come home to but this new one might just be my favorite. They also re-did the basement so it’s like it’s own little bar/workout room/man cave. Such a great place to hang out.

Christmas #2: The Walkers
On Christmas Eve night we headed to Avon, Indiana to celebrate with Rick’s family. We went to a Christmas Eve service and played fun board games into the night. You forget how fun those games can be until you start playing them. Apples to Apples and Scattergories can be a blast 🙂
It was great to spend time with his family, who we don’t see often either. They’ve got kids and kids are always so much fun.

This photo was kind of a joke because Rick’s nephew Tyler was away in the Air Force but he always poses for photos with this pose so we all did it for a photo to send to him. Turn our pretty funny though!

They were stocked up on the Christmas decorations and cookies galore. I’m not used to houses that constantly have sweets sitting out because my Mom doesn’t really allow it, ha ha. I didn’t mind but man, I ate my weight in cookies in two days! They were so good though so whatever!

I also had fun getting to know Rick’s niece, Emily, better. We did some practice driving sessions and she did a great job. It’s been a long time since I’ve actually hung out with a teenager and it’s pretty fun remembering those days. She’s such a sweetie too — as is his other niece, Caitlin.

Christmas morning was so fun — especially with the kids. Rick’s sister, Sandie, even got us both stockings! It’s been years since i had one of those and I love the thrill of reaching into the stocking to discover to fun stuff inside. This did not disappoint! I felt so loved to receive gifts from the family — even later when Sandie’s in-laws came and gave Rick and I presents. It was actually my first Christmas Day spent with a family not my own — and it turned out to be pretty great.

My favorite part of the day was watching Rick play with the kids. He is so the fun uncle that all the kids love. He just wears himself out spinning the around, picking them up, wrestling with the little boys, playing thumb wars and making them laugh.

It makes me see what a great Dad he will be someday in the — hopefully near — future. He’s such a big kid himself so I had to snap a few good pix.

Christmas night was spent eating more cookies than I ever needed too, watching movies and playing with some of our new toys. If you are interested in watching my husband get shocked, click here! I was a little too afraid to get hooked up this thingamajig.

We watched “Olympus Has Fallen” that night and I was out like a light. Now I’m hanging out a little longer with my family in Indiana until it’s back to work.

I've never thought much about Saints. I didn't … END_OF_DOCUMENT_TOKEN_TO_BE_REPLACED

I first heard of Nugo Nutrition bars at the … END_OF_DOCUMENT_TOKEN_TO_BE_REPLACED

Source.I'm so excited -- why? Because I get to go … END_OF_DOCUMENT_TOKEN_TO_BE_REPLACED

Walking down King Street after a sale stroll into … END_OF_DOCUMENT_TOKEN_TO_BE_REPLACED

I don't really have cankles, it's just the picture … END_OF_DOCUMENT_TOKEN_TO_BE_REPLACED

Oh early Sunday! I woke up this morning around … END_OF_DOCUMENT_TOKEN_TO_BE_REPLACED

Run: 3.5 miles Kind of cool I can just run on past … END_OF_DOCUMENT_TOKEN_TO_BE_REPLACED

As an injured athlete (if I may call myself that), … END_OF_DOCUMENT_TOKEN_TO_BE_REPLACED 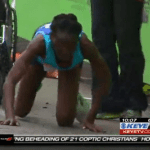 UPDATE: After receiving a bit of feedback on this … END_OF_DOCUMENT_TOKEN_TO_BE_REPLACED