Back in October when I started getting into a pumpkin-y mood, I was so excited to get some pumpkin and get to baking. To my dismay, twice I went the store and found they were sold out of pumpkin! So when I went back later, I stocked up on a stash of like 10 cans — just in case.

That means, it’s nearly March and I’ve got to use up these cans! I also had a bag of butterscotch chips that were waiting for a home. When I ran into these pumpkin-butterscotch cookies over at Joy’s place, I knew what I was making!

So I knew I was making cookies in the evening — and I knew I was going to be home alone all night so I just decided to forgo dinner. I am reeaaallly bad at making desserts and not taste testing. Like a lot. I ended up eating about 8 cookies and they were pretty amazing. I put “cake” in the title because they had a cake density about them — not the normal crispy cookie density. I think it’s because there was no butter — just oil.

Just out of the oven, I dipped them in cold milk. I’m not normally a butterscotch person but something about these chips mixed with the pumpkin flavor and melty out of the oven was awesome.

Directions:
Position a rack in the middle of the oven . Preheat the oven to 325 degrees F.  Line two baking sheets with parchment paper and butter the paper.

Stir the flour, baking powder, baking soda, salt and cinnamon together in a medium bowl and set aside.
In a large bowl, using an electric mixer on medium speed, beat the eggs and sugar until smooth and lightened in color, about 1 minute.  Stop the mixer and scrape the sides of the bowl as needed during mixing.

On low speed, mix the oil, pumpkin, and vanilla until blended.  Mix in the flour mixture to incorporate it.  Mix in the chips.

Bethany Mandel has been outspoken since I met her. … END_OF_DOCUMENT_TOKEN_TO_BE_REPLACED

It's almost Christmas so most people are in a more … END_OF_DOCUMENT_TOKEN_TO_BE_REPLACED 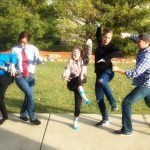 *With our nephew Nick and nieces Emily and … END_OF_DOCUMENT_TOKEN_TO_BE_REPLACED

Hi everyone! Thanks for all the great feedback on … END_OF_DOCUMENT_TOKEN_TO_BE_REPLACED

I was so excited to get a facial this weekend! My … END_OF_DOCUMENT_TOKEN_TO_BE_REPLACED

I seriously have a taco problem. All the recipes I … END_OF_DOCUMENT_TOKEN_TO_BE_REPLACED

Saw this and thought it was funny :) Obviously I … END_OF_DOCUMENT_TOKEN_TO_BE_REPLACED